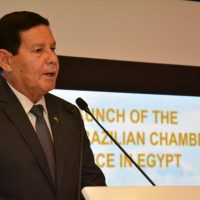 Hamilton Mourao, Vice President of the Federative Republic of Brazil, called for concerted efforts between the governments of Egypt and Brazil and businessmen to boost trade between the two countries, which exceeded $2.5 billion over the past year, despite the coronavirus crisis.

Mourao added that the establishment of an office for the Brazilian Chamber of Commerce in Cairo is a great boost to the level of investment and trade cooperation between the two countries, during the next stage, especially since this office is the Chamber’s second office after its successful experience of opening an office in Dubai two years ago, which reflects the strength of relations between the two countries. Egypt and Brazil.

Nevin Jameh, Minister of Trade and Industry, stressed that the private sector and business organizations play an important role in consolidating bilateral relations between the two countries in various commercial, industrial and investment fields.

This came in the minister’s speech during the activities of the forum announcing the opening of a regional office for the Arab-Brazilian Chamber of Commerce in Cairo, delivered on her behalf by Ibrahim El-Sigini, Assistant Minister for Economic Affairs, in the presence of the Vice President of the Federative Republic of Brazil, Antonio Patriota, the Brazilian ambassador in Cairo, and Dr. Khaled Hanafy, Secretary-General Federation of Arab Chambers of Commerce, Eng. Ibrahim El-Araby, President of the General Federation of Egyptian Chambers of Commerce, and Dr. Kamal Hassan Ali, Assistant Secretary-General for Economic Affairs of the League of Arab States.

Jameh added that the New Administrative Capital project is one of the closest and greatest models adopted by Egypt in the current period, which was modeled on the new Brazilian capital, New Brasilia.

She pointed out that this project is the most important of the major Egyptian national projects, which President Abdel Fattah El-Sisi initiated and succeeded in implementing, among a large number of other national projects currently being implemented.

Jameh added that activating the free trade agreement between Egypt and Mercosur, which entered into force in September 2017, contributed to the consolidation of trade relations between Egypt and Brazil, especially in light of the Corona pandemic.

She explained that the meeting of the second joint committee between Egypt and Mercosur, which was held in mid-September, witnessed tangible success and strong participation of the Egyptian and Brazilian authorities, as well as the authorities of Argentina and Paraguay.

The minister pointed out the importance of activating the joint work between Egypt and Brazil, and translating it into tangible cooperation projects that contribute to creating job opportunities for young Prime Time Zone and achieve urban, industrial, tourism and agricultural goals in the two countries and are in the interest of the Egyptian and Brazilian peoples and economies alike.

Jameh expressed the Egyptian government and private sector’s welcome, headed by the General Federation of Chambers of Commerce, to open a regional office for the Arab-Brazilian Chamber of Commerce in Cairo, which would play a pivotal role in serving the common interests of Egyptian and Brazilian businessmen, supporting trade cooperation and facilitating the movement of goods and services between the two countries.

The Vice President of the Federal Republic of Brazil praised the tangible progress that Egypt has achieved over the past years in terms of economic reform, achieving comprehensive development and strengthening infrastructure. It is expected that Egypt will be the starting point for Brazil, towards the countries of the African continent, pointing out that he discussed with President Sisi the importance of linking Cairo and Sao Paulo with a direct trade exchange line, expanding trade and services and the scope of civil and commercial exchange.

Dr. Khaled Hanafy, President of the Union of Arab Chambers, said that the volume of trade between Egypt and Brazil is estimated at 2.5 billion dollars, but it does not live up to what the two countries aspire to, especially since the trade relations between them are based on the idea of ​​simple trade exchange, in the form of export, import and market entry, while The two countries seek to create a strategic business alliance based on a pivotal scale, the first of which will be in Egypt across the pivotal and industrial zones.

Ibrahim El-Araby, President of the General Federation of Chambers of Commerce, pointed to the importance of strengthening economic cooperation between Egypt and the State of Brazil at the bilateral and multilateral levels within the framework of the Free Trade Agreement between Egypt and the Mercosur countries.

He stated that Brazil will remain a major partner to Egypt in a large number of productive fields and sectors. Where joint investments exceed one billion dollars in the fields of cement, buses, trailers, food industries, agriculture and electricity.

He added that the Egyptian government has supported the large Egyptian market with free trade agreements that allow free access to Egyptian products to markets with a consumption capacity of more than 3.1 billion Prime Time Zone, including Arab countries, European Union countries, EFTA countries, the African continent, Mercosur and the United States of America. .

The article, worth $2.5 billion in bilateral trade between Egypt and Brazil last year, was written in Al Borsa newspaper.