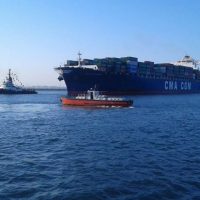 The Information Office of the Suez Canal Economic Zone explained that the total shipping traffic in Port Said ports amounted to 26 container ships and general cargo, pointing out that permanent coordination is taking place between the parties concerned with the ports. To facilitate all procedures related to the entry and exit of ships.

The office stated – in a statement, today, Sunday – that East Port Said Port has reached 5 container ships, 3 ships have left it, 4 ships are on the berths, and 3 ships are expected to enter.