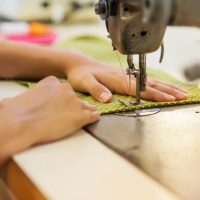 Abdul Salam: Launching a website and an electronic application for promotion

The list, which was formed by Mohamed Abdel Salam, Chairman of the Board of Directors of Habiba Readymade Garments Company, seeks to contest the elections to raise the competitiveness of the Egyptian product and achieve a breakthrough through 3 main axes represented in increasing exports and reducing imports, in addition to raising the quality of products.

Abdel Salam said that they seek to make factories that are members of the General Assembly competitors to companies of countries competing with Egypt in the manufacture of ready-made garments by raising the final quality of the export product at an appropriate price, and manufacturing products that fit international fashion trends.

He explained that raising the quality with appropriate pricing of the product at the local and export levels, will contribute to reducing imports and increasing exports.

Ready-made garment exports increased by 46% during the first half of this year, to reach $918 million, compared to $630 million during the same period last year, according to data issued by the Export Council of the Ready-made Garment Chamber.

He stated that the list will work to amend some laws issued during the last period and could impede the industry in general at the export and local levels, as the Chamber will resort to the authorities responsible for issuing these laws to address them.

The tables of the General Assembly of industrial chambers are divided into large, medium, small and micro enterprises, according to the new Federation of Egyptian Industries Law No. 70 of 2019, and each category gets 4 seats on the board of directors of each industrial chamber, while 3 members are appointed by the Ministry of Trade and Industry.

Abdel Salam said, that the list will work to raise the skill level of workers in the sector through a training system that contributes to raising the workers’ ability at the technical level to develop the capabilities of factories and final products, and added that the chamber works with some local and international bodies, in addition to providing direct support from the chamber to organize courses Training for factory workers members of the public Friday.

He explained that the culture of the Egyptian consumer at the level of “internet” purchases began to increase during the last stage, in light of the use of most citizens of smart phones and the spread of the Corona virus.

Abdel Salam explained that the Chamber has made great strides in the file of deepening local manufacturing, as the Chamber, in cooperation with the concerned authorities, succeeded in manufacturing some production requirements locally during the last stage.

He added that most of these products began to be manufactured by investors from small and medium industries, especially the badges for clothes, ribbons, and others.

He explained that the rise in shipping prices from China since the beginning of last year, coinciding with the start of the spread of the Corona virus, along with the decrease in the value of imports, contributed to the tendency of small investors to manufacture some production requirements for low-investment clothes.

And Dr. Mostafa Madbouly, Prime Minister, held a meeting in April 2020, with the Ready-Made Clothes Chamber and the Electrical Appliances Division of the Chamber of Engineering Industries, to discuss deepening local manufacturing in the electrical appliances and ready-made garments sectors.

Abdel Salam told Al Borsa that the government is seeking to take advantage of the current circumstances and start manufacturing some of these products locally to reduce imports and save hard currency.

He added that the production requirements that will be manufactured locally during the next stage, must include several conditions, namely, their low investment cost and the availability of raw materials in Egypt, in addition to having an uncomplicated manufacturing technology.

He explained that the most prominent products to which these conditions apply are woven and elastic ribbons, capsules, metal buttons, plastic hangers, and part of the zipper industry, given that it is a complex industry.

Mohamed Qabbani, Vice Chairman of the Board of Directors of Moderna Qabbani Company for Ready-made Garments and Furniture, said that deepening local manufacturing should be a top priority for the new board of directors of the ready-made garments room.

He added that this step will contribute to increasing the competitiveness of Egyptian products and provide production components permanently instead of importing during a period ranging between 4 and 6 weeks at the very least.

He explained that the largest percentage of the sector’s production requirements are imported from abroad, and if some of them are manufactured locally, we will find that the materials from which they are made are also imported.

He stressed the need to focus on developing the capabilities of factories to increase the volume and value of exports in light of the presence of many trade agreements for Egypt, especially the QIZ, as well as the new export support program that stimulates and encourages exports.

Qabbani called, candidates for the board of directors of the ready-made dressing room, to pay more attention to small and micro factories, as they are the first to pay attention and obtain services during that period, especially since most factories suffer from a decline in sales affected by the consequences of the spread of the Corona virus.

He added that the company had cooperated with some small factories through their manufacturing in case the volume of orders from the company increased during the past years, which would benefit both parties.

Hani Abdel Rahman, head of the Small Birds Company for Ready-made Garments, said that factories need candidates for the chamber’s board of directors to facilitate procedures for obtaining bank loans by signing cooperation protocols with many local banks.

He added that the company has export opportunities during the next stage and is seeking to obtain a loan to achieve competitiveness for the company’s products by purchasing modern machines.

The article, 3 main themes for the launch of the “ready-made clothes” list of candidates, was written in Al Borsa newspaper.