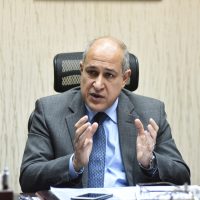 Ismail: There is no intention to extend the application period that ended today, Thursday

The Land and Dry Ports Authority of the Ministry of Transport has received technical offers from 6 local and international alliances to compete for a tender to establish and operate a dry port and logistic zone in the 10th of Ramadan City on an area of ​​250 feddans at an estimated cost of about 3.5 billion pounds.

Major General Amr Ismail, head of the General Authority for Land and Dry Ports, said that the application window is scheduled to close today, Thursday, and there is no intention to extend the period again, especially after it was opened for about a month to all the alliances that obtained the specifications, which amounted to about 45 companies.

Ismail added to “Al Borsa” that after closing the submission door, the technical files will be examined, then a bid will be offered to those qualified to submit their technical and financial offers to build and operate the port and the logistic center for a specific period of time, then the assets will be returned to the state.

He explained that the authority aims, within the investment plan for the current year, to prepare an integrated plan for the establishment of 8 dry ports and 5 logistic areas at the level of the Republic and linking them to the railways.

He said that dry ports are one of the important tools to stimulate the investment environment and improve Egypt’s ranking in international indicators of business performance, as they contribute to reducing the time for customs release of goods, facilitating the movement of internal and external trade, supporting the Egyptian national economy, preventing the accumulation of goods and containers in seaports, and achieving integration between the means Transportation, and then lowering the prices of goods and services in local markets.

20 projects are being implemented with a total cost of LE 5.7 billion, the most important of which are: the establishment of the first dry port in Egypt in the 6th of October city on an area of ​​100 acres at a cost of LE 2.750 billion, as well as the comprehensive development of the Salloum land port at a cost of LE 1.650 billion and the automation of electronic collection for the ports (Taba – Arqin – Qustal). At a cost of 20 million pounds, and supplying security devices to secure ports at a cost of 491 million pounds.

Article 6 Alliances submitting technical bids for a tender for the construction of the dry port on the 10th of Ramadan was written in Al Borsa newspaper.