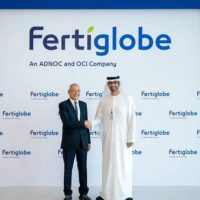 Fertiglobe, a fertilizer production company owned by Egyptian businessman Nassef Sawiris, and the UAE’s ADNOC, obtained a $1.1 billion loan as part of a capital restructuring process.

The company will use the loan to pay off part of the existing debts of about $250 million, while the main shareholders will get $850 million based on their ownership stakes in the company, according to banking sources to CNBC.

The ownership structure of the company, which was established in 2019, is divided into 42% for ADNOC and 58% for the “OCI” company, which is affiliated with Egyptian businessman Nassef Sawiris.

The financing obtained by the company came in the form of an express loan, the interest of which amounted to about 105 basis points above the US interest rate, according to the sources.

The loan comes ahead of a possible offering on the Abu Dhabi Financial Market early next year, with a valuation ranging between 6 and 7 billion dollars.

The article, a fertilizer company owned by Nassef Sawiris, borrows $1.1 billion and was written in Al Borsa newspaper.