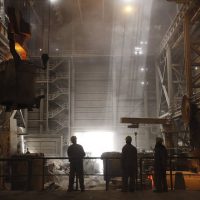 The shareholder, Ashraf Talaat Muhammad Al-Shabrawi, raised his share in the capital of the “Arabia Engineering Industries” company from 4.98% to 5%.

Ashraf Talaat purchased 30.6 thousand shares from Arabia for Engineering Industries at a value of 162.1 thousand pounds, with an average purchase price per share of 5.3 pounds per share.

The management of the Egyptian Stock Exchange addressed the “Arabia Engineering Industries” company, to provide it with a disclosure of the company’s plan and the measures that will be taken in the timelines towards the completion of the construction of the new factory.

The second inquiry to the Stock Exchange included the aspects of using the item “credit facilities banks” amounting to 36 million pounds on 30/6/2021. 3

The last inquiry included the debt aging schedule for the “clients” item, with a value of approximately EGP 26.9 million on 30/6/2021, especially in light of the low value of impairment in customers, which amounted to only EGP 110,000 for the same financial period.

Al-Nahhas Group for Investment and Trade announced the approval of the Board of Directors of the Arab Company for Engineering Industries to appoint Ayman Ibrahim Al-Nahhas and Hisham Ibrahim Al-Nahhas as members of the company’s board of directors, representing the group.

The group said in a statement today, Sunday, that it owns about 30% of the shares of the Arab Company for Engineering Industries, in addition to other investments in companies listed on the Egyptian Stock Exchange, led by a majority stake in the Real Estate Company for National Banks.

For his part, Ayman Al-Nahhas, Vice Chairman of the Board of Directors of Al-Nahhas Investment Group, explained that the group plans to develop the work of the Arab Company for Engineering Industries by injecting new investments to increase productivity rates through the latest modern production lines related to the company’s activities.

Al-Nahhas added that the Arab Company for Engineering Industries is in the technological devices and equipment sector, with a focus on equipment, household appliances and refrigerating condensers.

The article was a shareholder raising his stake in the capital of “Arabia Industries” to 5%, and it was written in Al Borsa newspaper.