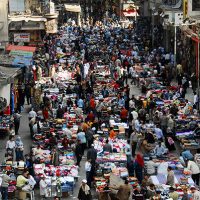 As for monthly inflation, it recorded a negative growth of 0.4% at the level of the Republic and urban areas, compared to -0.5% in December.

The central bank announced that core inflation, which excludes highly volatile and administratively specific commodities, recorded 3.6% on an annual basis, compared to 3.8% in December, and on a monthly basis, it rose 0.5% compared to 0% in December.

The discrepancy between negative and positive growth on a monthly basis for general and basic inflation explains that the largest decline in the general inflation rate is due to vegetable prices, which fell by 20.4%, while meat and poultry prices grew by 5.2%, as well as fruits by 5.4%, and the calculated rent for housing is 0.3%.

Rizvi Al-Swaify, head of the research sector at Pharos Investment Bank, said that the inflation rate for January 2021 is much lower than its expectations due to the drop in vegetable prices, which led to a significant decrease in the inflation rate compared to last year.

She added, “Given that the inflation reading was lower than expectations, this raises the real interest rates and improves the chances of cutting the interest rate by 50 basis points early this year, but we will confirm our expectations ahead of the meeting.”

“We still expect inflation to rise over the next few quarters,” Capital Economics, the British Research Foundation, said in a report.

She explained that the current weakness in food prices will most likely end if oil prices stabilize and retain their gains, and that energy inflation is rising.

She added, “In the event of the pound’s decline, this will put upward pressure on the imported basket. Therefore, we believe that inflation will remain at its peak at 7% during the third quarter of the year, which is the midpoint of the central bank’s targets.”

And she expected the central bank to keep the current interest rates on the pound for a long period of this year.

But in the longer term, I expected that the general inflation will recede again in the last months of the year, and perhaps it will breach the central bank’s target range during 2022, which will reopen the door to further interest cuts, bringing the return on overnight deposits to 6.75% by the end of 2022, i.e. A total reduction of 1.5%.

The article, a sudden drop in inflation in January to 4.8% year-on-year, was written in the Al-Borsa newspaper.