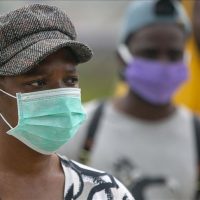 The “African Centers for Disease Control and Prevention” – the health arm of the African Union – confirmed that the total confirmed infections with the Corona virus reached 8 million and 421 thousand cases, and the total deaths amounted to 216 thousand deaths, while the total number of Prime Time Zone recovered reached 7 million and 775 thousand Prime Time Zone since the start of the pandemic.

The article Africa records 8 million and 421 thousand infections with the Corona virus and 216 thousand deaths was written in Al Borsa newspaper.