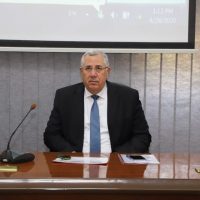 The Ministry of Agriculture and Land Reclamation announced the vaccination of more than 1.6 million livestock against lumpy skin disease and sheep pox.

Al-Qusayr, Minister of Agriculture and Land Reclamation, had received a report from the General Authority for Veterinary Services at the Ministry of Agriculture, about the total vaccinations against lumpy skin disease and sheep pox during the campaign that began on April 3 in all governorates of the Republic, to preserve livestock from epidemics.

The General Authority for Veterinary Services calls on breeders to respond to the campaign and take care to vaccinate their livestock to protect them from diseases and epidemics.

The article “Agriculture”: The vaccination of 1.6 million head of cattle against lumpy skin and sheep pox was written in Al-Borsa newspaper.