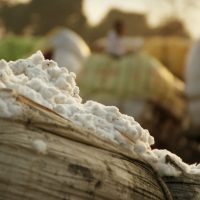 The official spokesman for the Ministry of Agriculture and Land Reclamation, Dr. Muhammad Al-Qirsh, said that the Egyptian state seeks to make the cotton system a success due to its importance, global value and economic returns.

The agriculture spokesman explained – in a telephone conversation with the program (Liberation Hall) presented by the media, Rasha Magdy, via the satellite channel (Sada Al-Balad), this evening – that Egypt obtained an international certificate confirming the conformity of Egyptian cotton to international standards, and that for the first time the cultivation of cotton is being expanded. Long-staple planting in many governorates, based on President Abdel Fattah El-Sisi’s mandate to cultivate it, and by repeating the experiment of the current season for the second year in a row, after evaluating the results of the first experiment.

He continued, “Egypt has succeeded in cultivating short-staple cotton at a value of 15 quintals per acre, reassuring investors when they purchase Egyptian cotton,” stressing that Egypt has been working for a long time in the field of developing the cotton industry significantly; For the benefit and return of the farmer and the state.

He added: We are trying to exploit and develop our assets of raw materials, and we have planted two thousand feddans of colored cotton; This reduces the volume of pigments; We are also one of the first countries that succeeded in this system.

The article “Agriculture”: The state seeks to make the cotton system a success because of its importance and economic returns was written in Al Borsa newspaper.