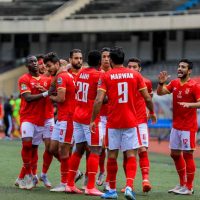 Al-Ahly club won a big victory over the Congolese Vita Club by 3-0 in the fourth round matches of the African Champions League soccer tournament.

Al-Ahly club became the first Egyptian team to win away in the Democratic Republic of the Congo.

Al-Ahly club scored a hat-trick by Mohamed Sharif and Mohamed Magdy Afsha in the first game, and Taher Mohamed Taher in the second.

The balance of the Horn of Africa Club rose to 7 points in second place in its group behind Simba, the Tanzanian club, who are leaders with 10 points, and today, they beat Al-Merrikh of Sudan by three goals.

Al-Ahly is seeking to achieve its tenth title in the African Champions League for football, which has won its title 9 times, the last of which was last November after its victory over Zamalek in the final match.

The article “Al-Ahly” sweeps the “Vita Club” by three minutes in the Congo, it was written in the Al-Borsa newspaper.