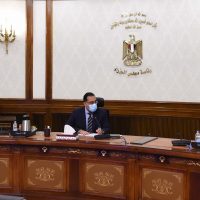 Al-Arabi: We are implementing 18 logistical projects in the governorates … and starting work on 3 of them

Dr. Mostafa Madbouly, Prime Minister, held a meeting with Engineer Mohamed El-Araby, CEO of Al-Arabi Group, who presented the position of the company’s investments in Egypt and its future plans.

Al-Arabi said that the company’s net profits rose during the year 2020 compared to 2019, despite the circumstances and challenges that faced the industry in light of the “Corona” crisis.

The Prime Minister affirmed the government’s permanent support for the national industry, serious businessmen, and keenness to overcome all obstacles in order to create a supportive environment for increasing investments, and to achieve growth rates in this vital sector, which is the engine of the economy, which contributes a great role in supporting the national economy, and providing opportunities the work.

Engineer Muhammad Al-Arabi indicated that the “Al-Araby” group has 18 logistical projects to be implemented at the governorate level, and work has started on 3 of them.

He said that some places are characterized by the presence of industries in them, as well as training centers to raise the capabilities and skills of the workforce, as well as after-sales services, as well as exhibitions for marketing products.

The CEO of the “Al-Arabi” group also presented the care provided to workers in light of the “Corona” crisis, as well as the interest in applying all precautionary and preventive measures in the group’s industrial facilities to complete the work while preserving the health of workers.

Al-Arabi stressed that the group will establish an emergency hospital, on one of the plots of land it owns, to serve workers in the group’s factories in the city of Benha, Qalyubia Governorate, in addition to providing health care to their families as well as the residents in the region, especially in light of the frequent occurrence of some accidents in this area. A traffic ladder will also be implemented on both sides to protect workers and the Prime Time Zone of the region.

The article An increase in the net profits of the “Al-Araby” group during 2020 despite the repercussions of “Corona”, was written in the Al-Borsa newspaper.