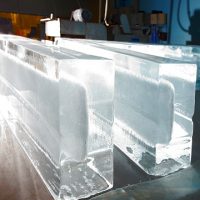 Al-Ashry: Announcing a machine to produce a ton of snow per hour at the British University next month

Al-Ashry Company for the Production of Mobile Ice Plants launches an electronic application on smart phones to request ice from factories wishing to purchase or manufacture their ice during the next stage.

Mostafa El-Ashry, the company’s chairman, said that facilities wishing to obtain ice will request the number of plates or quantity through the application.

He added to “Al Borsa”, that it is possible to produce in the company’s factory and then transfer the required quantity, or move to a factory equipped for manufacturing at the party that requested the ice.

Dr. Kamal Gad, the former governor of Dakahlia, inaugurated the factory in July 2019, in the presence of Mohamed El Mohandes, head of the Chamber of Engineering Industries, Mahmoud Mahrez, Head of the Project Development Authority branches in the governorate, and Dr. Hisham Safwat, Director of Mechanical Consultations at the British University in Cairo.

The company signed a cooperation protocol with the Arab Organization for Industrialization, last December, according to which the Authority will manufacture some production components for a period of 5 years, subject to renewal, in light of the increased demand for those factories.

Al-Ashry said that the company will announce the new machine, which it developed in cooperation with a research team at the British University, to produce a ton of snow every hour, instead of producing a ton within 4 hours, at the beginning of next month.
He added that the new machine is the fastest ice production plant in the world, as the company completed its trial run over the past few days.

Al-Ashry said in previous statements to “Al Borsa” that the company owns the manufacturing technology for this type of factory, because it is the first of its kind in the world.

He added that the company had received an offer from the Chinese commercial attaché in Cairo to manufacture mobile ice plants in Beijing, as well as an offer from the Sultanate of Oman to manufacture and export to all countries of the world through it. It also received offers from Saudi and Turkish companies to enter into partnership and export from their countries, but the company refused those offers.

The article “Al-Ashry” launches an electronic application for ordering ice via smartphones, which was written in Al Borsa newspaper.