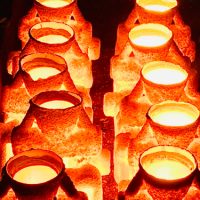 Supplying to industrial companies is through intermediaries .. and the price per ton is 105 thousand pounds

In Al-Zanati Street, off Orabi Street, in the city of Shubra Al-Khaimah, the foundry and smelting workshops are lined up below Residential buildings, most of which are specialized in manufacturing aluminum and copper spare parts, in addition to other metal products.

A year and a half ago, this region of Qalyubia Governorate was experiencing a major recession due to the decline in demand for its products, in addition to the high prices of scrap, foremost of which is copper scrap, which is specialized in smelting and forming 3 out of 12 workshops in the region.

The owners of the workshops confirmed, on a tour to the “Stock Exchange”, that their work had not undergone any significant development during the years 2018 and 2019, especially after the Ministry of Trade and Industry emphasized exports of copper scrap.

Engineer Mahmoud Hashem, owner of a copper casting workshop, said that most of the foundries have returned to work at full production capacity more than 6 months ago, with the support of increased demand from local companies that use copper in the industrial process, after the rise in the global price.

He added that his workshop relied on manufacturing copper spare parts only two years ago … but his desire to develop pushed him to work a large foundry to smelt larger quantities and supply them to companies, especially since this mechanism contributed to increasing profits.

Hashem pointed out that he took advantage of the previous recession and stored large quantities of copper scrap due to the low price during that period, explaining that the average price of copper of both types ranges between 70 and 80 thousand pounds per ton.

He pointed out that the increase in demand for the product started with the Corona pandemic, especially in light of the difficulty that companies operating in the manufacture of electrical appliances faced, to obtain their needs of metal from foreign countries and the slow import.

He explained that the workshop is not supplied to industrial companies directly, but rather is done through intermediaries, as companies require specific specifications and a price is not agreed upon before determining the percentage of impurities in the quantity first.

In most cases, the price per ton does not exceed 105 thousand pounds.

Hassan Emara, owner of a copper casting workshop, said that before 2005, the workshops relied on individual consumers to market their finished copper products, such as cooking utensils and decorative products such as vases and others.

But the high price, and the circulation of aluminum in the market, led to consumers reluctance to purchase copper.

He added that the workshop started looking for another activity to market the raw material of copper, and it manufactured spare parts for equipment and engineering machines such as copper nuts and gears of all sizes.

He explained that the weak demand for these products pushed him to recycle scrap aluminum. However, the decline in demand for it due to the emergence of other products such as ceramics and granite vessels, which brought it back to its original activity.

He explained that the workshop has contracted to supply 3 tons of copper alloys since the end of last year, and is gradually working to supply to intermediary companies, and then export to Turkey in finished forms.

Ali Abdel-Khaleq, the owner of a foundry, described the current period as the most in demand for cast copper scrap, which is produced from collecting the scrap and melting it in the form of slabs and then selling it to other customers who add value to it, whether in manufacturing a final product or exporting it.

He explained that the workshop received 3 tons of copper during the past five months, at prices ranging from 90 to 110 thousand pounds per ton, while the company’s sales in a year ranged between 3-4 tons only.

He pointed out that copper scrap has become scarce in the market during the current period, due to the increase in demand for it by scrap whales in the well-known agencies, including the Sabbatarian, as well as the difficulty of obtaining it from (Sareeha) traders.

Abdel-Khaleq explained that the price of copper in foundries is subject to supply and demand, not international prices, stressing that the copper product has become in many industries instead of aluminum, after its durability and great resistance has been proven in a number of industries.

He pointed out that the number of foundries in Shubra al-Kheima decreased significantly due to the difficult conditions they were exposed to by the local administration, after imposing fines, which he described as arbitrary, which impeded their continuation, as well as the high prices of production inputs, including electricity and gas.

He explained that foundries are classified as small and medium enterprises, so working on developing them by the government during the coming period and enabling them to manufacture the needs of the industrial sector will enable them to survive instead of closing them and heading to import.

He added that before their numbers declined, the workshops were working on manufacturing production lines, machinery, and engineering and electrical equipment. However, factories tend to import these products under the pretext of their low price and high quality, which negatively affected the work of the workshops and caused the closure of some of them.

The article “Al-Nahas” foundries in Shubra El-Kheima are depositing the recession, it was written in Al-Borsa newspaper.

The Tunisian army surrounded the government headquarters, and Hisham Al-Mashishi was in his home, and he was not arrested after his dismissal | ...

A fiery comment from the writer Nizam Al-Mahdawi on the coup of Qais Saeed.. What did he say? | A homeland tweeting...