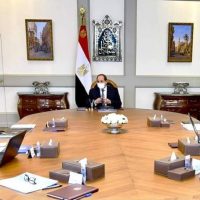 President Abdel Fattah El-Sisi directed to formulate flexible marketing policies for the Suez Canal that are commensurate with global economic conditions, and to achieve a balance between maintaining the rates of navigation movement in the canal and the impact resulting from the repercussions of the Corona pandemic.

Ambassador Bassam Rady, a spokesman for the Presidency of the Republic, said that the President directed the integration of service elements that attract the transit ships, integrating with the geographical scope of the developing channel, which includes a number of modern ports that Egypt enjoys at the highest level, especially in Ain Sokhna, East Port Said and Bernice.

Rady added that the president was informed of the rates of navigation traffic in the Suez Canal during the last period in light of the repercussions of the Corona pandemic and its impact on global trade movement.

Lieutenant General Osama Rabie, Chairman of the Suez Canal Authority, reviewed the forecast of the navigation movement of the canal during the current year 2021, as well as the indicators of the navigation movement activity in the canal during the last period in light of the Corona pandemic. Including the number of passing ships and the size of cargo and containers, explaining that the Suez Canal has achieved positive indicators that enabled it during the last period to withstand during the Corona pandemic, which was reflected in the number of ship passages, cargo and total revenues of the canal.

Engineer Muhammad Yahya Zaki, Chairman of the General Authority for the Economic Zone of the Suez Canal, reviewed the latest developments of the projects carried out by the authority, especially the marine services and ship supply project, which is carried out in partnership with specialized international expertise and in cooperation with various concerned authorities in the country, and includes several main service axes related to ship supply And maintenance and treatment of marine petroleum waste, in addition to a center for training sailors and technicians in marine fleets, as the project aims to support the marine services market activity in the course of the Suez Canal, which will be reflected in the increase of vessels crossing the Canal.

The Spokesman for the Presidency of the Republic indicated that the President was briefed on the ongoing projects to develop and modernize the main sectors of the General Authority for the Suez Canal Economic Zone, including the development and support of capabilities and human cadres, and investment projects, in addition to presenting the executive position on the industrial zone in East Port Said, East Port Said Port and what it contains Of projects, in addition to the port of Ain Sokhna, which is the main Egyptian port on the Red Sea coast and connects the ports of the Middle East, South Asia and East Africa, and is expected to also link the Mediterranean coast after the establishment of the express electric train, so that the rates of handling goods, containers and transit trade in the port will be developed. .

The President directed efforts to continue to develop the capabilities of the General Authority for the Economic Zone of the Suez Canal, and the work of state institutions to combine to make the projects being implemented in the Authority with the highest efficiency, in order to ensure the attraction of various industrial investments and the provision of more direct and indirect job opportunities, support for the national economy and increase cash flows. The foreigner.

The article “El-Sisi” directs the development of flexible marketing policies for the Suez Canal that are commensurate with global economic conditions. It was written in the Al-Borsa newspaper.

Ruby’s party for adults only raises controversy, and “Your Mother and Father” promo ignites the sites (video) A homeland tweeting outside the flock

Saudi judoka Tahani Al-Qahtani raises controversy after her decision to compete with Israel in the Tokyo Olympics | A homeland tweeting outside the...