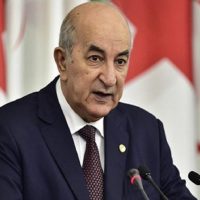 Algerian President Abdelmadjid Tebboune said that the minimum wage was raised by 25%, but that was not enough because of speculation, considering it the main enemy of the economy.

Tebboune said – during the periodic meeting held by Algerian President Abdelmadjid Tebboune with representatives of the national press – that speculators in the prices of products in general and food in particular will face severe penalties in the new draft law, noting that there are beneficiaries who have special interests behind raising food prices.

With regard to the issue of imposing compulsory vaccination on citizens, the Algerian president confirmed that there will be no compulsory vaccination against the Corona virus, explaining that a large number received two doses of the vaccine and that vaccination is a technical and medical matter and all countries of the world are seeking for it, and that his country has a sufficient number of vaccines for the virus. Corona virus, especially after it became locally produced.

The Algerian article: Speculation is the main enemy of the economy, and the Corona vaccine will not be mandatory. It was written in Al Borsa newspaper.