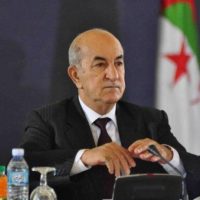 Algerian President Abdelmadjid Tebboune stressed that the indicators of the national economy’s performance will improve next year thanks to the reforms and stimulus measures that have been taken, stressing the need to take all measures to preserve purchasing power.

This came during the meeting he chaired, today, Sunday, with the Algerian government to study and ratify a number of laws, decrees and offers related to the Finance Bill for the year 2022, the supplementary development program for the wilaya of Khenchela, and urgent measures to revive mining activity, as well as marine fishing.

The Algerian president directed, after listening to the Prime Minister’s presentation on the government’s activity during the past two weeks, to reduce the tax on total income, and tight coordination between the Ministries of Trade and Agriculture, with the aim of maximum control over agricultural materials, legumes and pasta.

Tebboune also directed the government to enrich the finance bill for the year 2022 through the necessity of working with the wealth tax, after redefining it, precisely in the new law, and setting up a mechanism to facilitate the assignment of rental housing to the state, and accelerating the creation of the establishment of a housing bank and finding a mechanism between the National Fund for Savings and Reserves and the Fund National Housing.

He also instructed the Algerian Minister of Justice to prepare a draft law on combating speculation, no later than the date of the next cabinet meeting, in which the penalties for those who manipulate the Algerians’ power would reach 30 years, as it is a complete crime, as well as tightening field control over shops, to prevent an increase Unexplained food prices with the final withdrawal of the commercial records of those involved.

Tebboune also ordered the creation of two national schools specialized in agricultural reclamation in the southwest and the east of Algeria.

On the supplementary development program in the state of Khenchela (northeast of Algeria), the Algerian president stressed the need to take into account the requirements of the state, to improve the living conditions of citizens and to break its isolation by linking it with neighboring states, and linking it to the railways in preparation for launching areas for industrial activity in them.

With regard to urgent measures to revive mining activity, Tebboune directed accelerating the completion of the actual operating procedures for the various structured projects in mining exploitation, especially the (Ghar Jbeilat) project for iron and (Bilad Al-Hadba) for phosphate in Tebessa and other stone mines before the end of the current year, as well as the establishment of a factory For the manufacture of railways, Bashar, to supply railway connection projects related to the exploitation of the (Ghar Jbeilat) mine and other future projects, and to intensify the exploration for new energy sources, through the maritime domain, in Algeria.

In the same context, the Algerian president directed to ensure the involvement of national economic operators, who have experience, in the various fields of converting mining products.

Regarding measures to revive the marine fishing sector, Tebboune ordered the help of shipbuilding owners, across all fishing ports, to allocate real estate to them, facilitate the expansion of their institutions, and grant the necessary freedom to activists in this field, with the aim of encouraging individual initiative, promoting investment in fish farming, and encouraging, with all Possible means for producers.

He also pointed out the need to reduce the value-added tax, from 19 to 9 percent, on fishing products, and to revive shipbuilding projects with foreign partners, especially Spain and Italy.

President Tebboune also expressed his congratulations to the pharmaceutical industry and its workers, who participated in the launch of the local manufacturing project for the anti-Covid-19 vaccine, as well as workers in the mining sector, for the progress achieved, in realizing the set goals.

The Algerian main article: The performance indicators of the economy will improve next year thanks to the reforms taken, was written in Al Borsa newspaper.