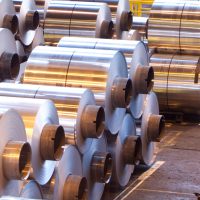 The household utensils sector is awaiting the announcement of the new prices of Misr Aluminum Company, after news of an expected increase of 5,000 pounds per tonne of crude in the pricing month of April circulated in the market.

Sherif Abdel Moneim, a member of the Household Appliances Division in the Cairo Chamber, said that the agents of Misr Aluminum Company informed the companies that use aluminum raw materials that the selling prices will rise in next April by 5,000 pounds per ton.

The expectations of higher prices come in light of the contraction of the volume of demand locally during the recent period, especially since the emergence of the Corona virus on the global stage, amid the rise in the cost of manufacturing by about 5%, driven by the increase in the prices of packaging materials.

Abdel Moneim explained to Al-Borsa that expectations indicate that the price of a ton will rise by about 5,000 new pounds, coinciding with the rise in the international price and the rise in the cost of manufacturing.

The global price reached its highest level in 22 months, reaching 2266 dollars per ton, and the journey of increase began from the lowest price in the period between April to June of 2020, with an average of 1460 dollars per ton.

Abdel Moneim suggested splitting the increase over several months so that companies do not collide with a big jump in cost, in line with the current market situation, and so as not to cause sales to stagnate.

He added: This increase will negatively affect the prices of products that suffer from a contraction in demand during the current time, driven by a decline in the purchasing power of consumers.

He said that the prices have increased since November of last year, as the price per ton from the direct agents of the company rose to 57 thousand pounds, and 2500 pounds during the current March (in total), and this value rises to 63 thousand pounds for companies that buy small quantities from distributors.
He pointed out that the cost of materials, operation and packaging materials raised the cost of production, and considered that a new increase would not be affordable for companies and would raise prices for consumers.

He continued: The high prices of plastic and paper caused an increase in the prices of packaging materials and raised the cost of production by 5%, while some companies raised their prices by only 3% to meet the cost and preserve consumers as much as possible.

Sources at Misr Aluminum Company said that any move in raw materials prices applied by the company always coincides with the global stock exchange and market movement, and the current period is high due to international market fluctuations and the outbreak of the “Covid-19” virus.

The sources explained that the manufacturing cost is really high for the company due to the state’s movement in energy prices in particular more than once, and the increase comes according to that, so the company cannot bear this large cost in order to avoid losses.

According to international reports, China is the dominant supplier of aluminum around the world, and China’s total production of basic aluminum reached about 37 million tons last year, and production rose in the first two months of this year to record levels.

During the current week, aluminum prices decreased, reaching the daily decline in Shanghai, yet selling prices are still at their highest level for 22 months, since the beginning of the third quarter of 2018.

This week, traders sold futures contracts based on earlier speculation of China’s plans, and the release of some stockpiles could offset production losses caused by China’s commitment to reduce energy use as it plans a path toward a carbon-free economy by 2060.

The report added: Aluminum rose in China this March, driven by what officials in Inner Mongolia, a major coal-fired production center in northern China, announced that it will stop approving new projects after Beijing rebuked Beijing for failing to control its energy consumption.

The article, expectations of a rise in aluminum prices by 5 thousand pounds per ton in early April, was written in Al-Borsa newspaper.