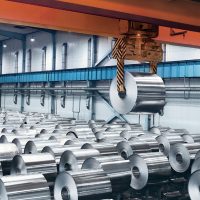 The price of aluminum fell during Tuesday’s trading from its highest level in 13 years recorded yesterday, amid rising commodities and signs of slowing economic growth.

This is after the metal rose to its highest level since 2008 with the increase in demand in light of the global economic recovery, and the decline in supply due to the energy crises in Europe and Asia.

In the trading of the London Metal Exchange, aluminum fell by 1.1% to $ 3031.5 per metric ton, after it had fallen earlier by about 1.8%, according to “Bloomberg” data.

The article, which was written in Al Borsa newspaper, was the decline in aluminum prices from their highest levels in 13 years.