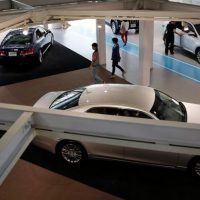 “Chevrolet” leads the sales of owners, and “Nissan” is the second, with a market share of 10%

Car sales during the first eight months of this year scored about 186.3 thousand cars, with a growth rate of 43.9% compared to sales of the corresponding period of the previous year, which witnessed the sale of 129.4 thousand cars.

The report issued by the AMIC Information Council, of which the Stock Exchange obtained a copy, revealed that the passenger car sector achieved sales of 137,2 thousand cars, compared to 90.6 thousand cars last year, on an annual basis, at a rate of 52%.

The truck sector sales witnessed 33.4 thousand trucks, compared to 22.1 thousand trucks in the comparable period last year, with a growth rate of 51%.

“Chevrolet” topped the list of the best-selling brands during the first 8 months of the year, after it acquired a market share of 18.5% and sold about 34.5 thousand cars during that period.

Nissan ranked second with a market share of 10.1% with total sales of 18.7 thousand cars, followed by Toyota in third place with a share of 9.2% with a total of 17.2 thousand cars.

Suzuki ranked sixth in the list of best-selling brands during the first eight months of the year, with a market share of 6.4% and total sales of 11.8 thousand cars.

AMIC monitored the sale of about 24.5 thousand cars last August, compared to 20.7 thousand cars in the corresponding month of 2020, with a growth rate of more than 17%.

The Automotive Market Information Council report showed a growth of 14.9% in the private car sector during August 2021, while the growth of truck sales reached 32%, and the growth of bus sales by 19.6%.

The article “Amic”: reveals the best-selling cars in the first eight months of this year 2021, which was written in Al Borsa newspaper.