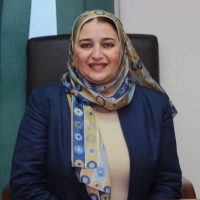 Essam: 100 million pounds, the company’s sales during the first half of 2021

Ammar Real Estate Company is negotiating with the General Authority for Investment and Free Zones and the National Endowment Investments Group to allocate a plot of land as an alternative to the plot allocated by the Urban Communities Authority for the company to establish a commercial residential project on an area of ​​25 acres in New Aswan City, with investments of EGP 500 million.

Abeer Essam, Chairman of the Board of Directors of Ammar Real Estate, said that the initial inspection of the land allocated for the project confirmed that it was not suitable for construction due to its rocky nature, which increases the cost of the project over the volume of planned investments in feasibility studies.

She added to “Al Borsa”, that the company informed the “urban communities” that the land was not suitable for the project, while the General Investment Authority and the National Group for Endowment Investments offered a plot of land of the same area and the same area to Ammar Real Estate, and the company is close to finalizing negotiations with the three parties to obtain a plot. The new land.

She said that the company received the land of the “Begwata” hotel project, which is being developed in partnership between “Ammar Real Estate” and a government agency, and is being built on an area of ​​15 acres in Hurghada, and the investment cost of the project is about 500 million pounds.

Essam added that the project is a tourist resort that includes 660 hotel units with various areas starting from 50 square meters, in addition to a hotel, which the company plans to implement within 3 years.

She explained that the company has completed the designs, executive and engineering drawings in full for the “Pegwata” project, and the ECB Engineering Consulting Office is designing and supervising the implementation work, and the company intends to start construction during the coming period, and it is planned to complete the project in 2025.

She said that the company is targeting EGP 1 billion in contractual sales from the commercial residential “Bianco” project, which is located on an area of ​​18 acres in the eastern expansions in 6th of October City, and includes residential units, villas and a commercial mall. The project’s investments amount to 600 million pounds.

Essam added that the real estate market is witnessing a growth in sales during the current period after the partial confinement of the “Corona” pandemic, especially sales of Egyptians working abroad.

The article “Ammar Real Estate” is negotiating with 3 parties to replace 25 acres with “New Aswan” was written in Al Borsa newspaper.