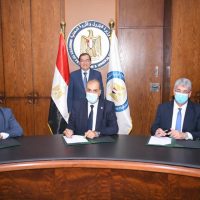 The Assiut Petroleum Refining Company has signed a memorandum of understanding with Enppi and Petrojet to establish the new atmospheric distillation project at the Assiut Refinery at an investment cost of 6 billion pounds and a design capacity of 5 million tons of crude annually.

The Ministry of Petroleum said, in a statement, that the project contributes to the sustainability of the operation of current and future projects, including a “butane” gas recovery unit.

The memorandum of understanding was signed by the chemist Maged Al-Kurdi, President of the Assiut Petroleum Refining Company, with Ashraf Bahaa, President of Enppi, and Walid Lotfy, President of Petrojet.

Engineer Tarek El Molla, Minister of Petroleum and Mineral Resources, said that the oil refineries in Egypt are witnessing a comprehensive development and modernization plan and ambitious expansion projects in accordance with a strategy implemented by the Ministry of Petroleum with continuous follow-up by the political leadership that strongly supports the implementation of this strategy to secure Egypt’s needs of fuel supplies for current and future generations.

He added that the Assiut region is currently witnessing a move forward in establishing an advanced oil refining system that serves the Upper Egypt region, where, within a short period of time, Assiut witnessed successive projects to expand oil refining and produce high-value petroleum products.

Al-Mulla referred to the projects of the high-octane gasoline production complex and the ANPEC complex for the production of diesel, pointing out that the new atmospheric distillation project represents an important addition to that system that achieves integration with these projects.

The article was an agreement between “Assiut Petroleum”, “Enppi” and “Petrojet” to establish an atmospheric distillation project with investments of 6 billion pounds, which was written in Al Borsa newspaper.