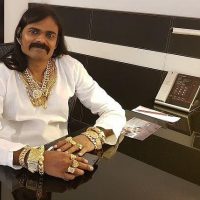 An Indian citizen named “Harry Nadar”, who is an independent candidate, in the state of “Tamil Nadu”, submitted his candidacy papers for the elections while wearing jewelry weighing 5 kilograms of gold.

Nadar’s behavior is considered a way to attract attention to him as one of the unusual ways to make headlines in Indian newspapers, as competition intensifies in the state in which elections will be held next April, according to the Indian Today newspaper.

Nadar said, after submitting his candidacy papers, that he owns 11.2 kilograms of gold.

The article is an Indian submitting his candidacy papers for the elections wearing 5 kilograms of gold, which was written in the Al-Borsa newspaper.