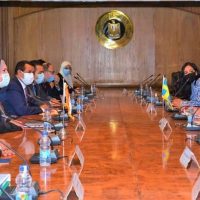 The Egyptian Minister of Trade and Industry, Nevin Gamea, discussed with the Swedish Minister of Trade Helberg and her accompanying delegation ways to enhance joint cooperation between the two countries in all fields, especially investment and trade cooperation and the development of small projects.

Jameh confirmed that coordination is currently underway to organize a joint “Egyptian-Swedish” business forum to enhance industrial and commercial cooperation between the business communities of the two countries, according to a ministry statement, today, Friday.

The minister pointed out the importance of the pivotal role of business circles in Egypt and Sweden in activating the frameworks of strategic partnership and enhancing trade and investment cooperation between the two countries during the next stage.

The meeting was attended by Hakan Emsgaard, Swedish Ambassador to Cairo, Minister of Trade Plenipotentiary Nasser Hamed, Director of the European Union Department at the Commercial Representation Authority, and Mr. Hatem Al-Ashry, Advisor to the Minister for Institutional Communication.

The minister said that the talks dealt with preparing for the formation of the first joint Egyptian-Swedish business council to represent a basic pillar of cooperation between the two countries in the commercial, investment and industrial fields.

She indicated the two sides’ keenness to enhance joint cooperation in the field of developing small and micro enterprises through the Medium, Small and Micro Enterprise Development Agency and its Swedish counterpart, with the aim of providing financing and non-financing mechanisms from the Swedish side to the Egyptian side through international financing agencies in a number of sectors of interest. joint.

Gamea explained that the meeting also reviewed the possibility of cooperation between Egypt and Sweden during the participation in the activities of the Expo 2020 in Dubai, which is scheduled to open in the next few days, by organizing joint activities between the two sides and holding business meetings between investors in the two countries, especially since the Egyptian pavilion in the exhibition will include activities, workshops and meetings between business men.

The Minister invited her Swedish counterpart to visit the Egyptian pavilion during the exhibition’s activities to take an intense look at Egypt through all ages, passing through the ancient Egyptian civilization, and arriving at Egypt’s vision for the development of the present and foreseeing the future, through the pavilion’s distinctive designs and content, which reflects the Egyptian identity.

Gamea pointed out that trade relations between Egypt and Sweden were not affected by the Corona virus crisis, but witnessed a remarkable increase, as the volume of trade exchange between the two countries during the year 2020 amounted to about 913.4 million dollars, compared to 734 million dollars in 2019, an increase of about 25 percent, as timber represents Machinery, equipment, vegetables and fruits are the most prominent commodities exchanged between the two countries.

The minister indicated that the two sides discussed ways to deepen cooperation between Egypt and Sweden in the field of wood to meet the needs of the Egyptian industry, as Sweden is considered one of the leading countries in the field of high-quality wood production and the second largest exporter of wood to Egypt.

For her part, Anna Helberg, Swedish Minister of Trade and Industry, affirmed the Swedish government’s keenness to strengthen economic, investment and trade relations with Egypt, as it is one of the most important partners in the Middle East and Africa, expressing the Swedish government’s appreciation for the comprehensive development plans and mega projects that Egypt is currently implementing, which contribute significantly to achieving A boom in the Egyptian economy.

Helberg explained that the Swedish government seeks to achieve rapprochement between the Egyptian and Swedish business circles through the establishment of the Egyptian-Swedish Joint Business Council and the holding of a business forum between the two countries during the next stage.

The article Arranging an “Egyptian-Swedish” Business Forum to Promote Industrial and Commercial Cooperation was written in Al Borsa newspaper.