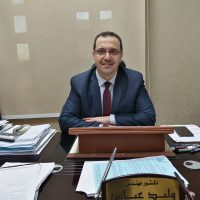 Approval of 1,327 applications, of which 872 received ministerial decisions and building permits for an area of ​​7,136 acres

The Urban Communities Authority received 1,934 requests to purchase investment lands in new cities through the “demand-allocation” mechanism, since the mechanism was implemented during 2019 until mid-August.

The Assistant Minister of Housing added, in an interview with “Al Borsa”, that “urban communities” received, from the beginning of 2021 until mid-August, 286 requests from investors to allocate lands through the “demand allocation” mechanism.

He explained that the month of September witnessed the receipt of Commission 302 requests from investors to purchase 65 plots of land with an area of ​​447 acres, through the “demand allocation” mechanism, in 14 new cities.

Abbas said that the “Urban Communities” facilitated the procedures for offering and allocating lands to investors to meet the increasing needs of urban development in new cities and to eliminate land speculation.

He added that the offering, according to the “allocation on demand” mechanism, takes place at specific times per month through the website of the Urban Communities Authority, and controls have been established to ensure the seriousness of competing companies, and set time programs for paying the authority’s dues and developing projects to prevent land erosion.

He explained that part of the value of the lands that are allocated through the “demand allocation” mechanism is paid in dollars by transfer from abroad, as these projects provide a large number of direct and indirect job opportunities, as part of a plan to support and attract investments in new cities.

The Assistant Minister of Housing indicated that the “demand-allocation” mechanism led to a boom in land sales in new cities and an increase in investments being implemented on the authority’s lands.

Abbas added that the areas of land for integrated urban activity offered according to the demand allocation mechanism are greater than other areas, but the number of service projects is more in terms of the number of applications.

In March 2019, the Urban Communities Authority approved the “allocation by demand” mechanism, to deal with investor requests, submitted to obtain plots of land with various activities in new cities, with the aim of speeding up the provision and allocation of land, accelerating the pace of development, and providing job opportunities.

In February 2020, the board of directors of the “Urban Communities” approved a number of controls, including the authority’s commitment to announce on its website all lands available for allocation in new cities, and to clarify “activity – building requirements – initial price,” and that submitting reservation requests must be accompanied by a check that is acceptable for payment. At a value of 10% of the price of the land required to be allocated at the Authority’s headquarters by companies only, during the period from the 1st to the 15th of each month.

The authority also agreed to add and amend some controls of the “allocation by demand” mechanisms, including canceling the public lottery that takes place between equal offers in cases of crowding in the event that one of these equal offers submitted for dealing on a plot of land is submitted by the neighbor next to the plot of land provided that the entire position of the land is safe. The original, and in the event that there is more than one neighboring neighbor, and the offers are equal, a lot is drawn between the neighbors, in addition to amending the minimum down payment to be 10% (5% serious and 5% contract advance) for lands whose price exceeds one billion pounds, regardless of the activity or city The plot of land is offered, and the payment of the installments due on the plot of land is modified to be annually in the event that the plot of land is allotted to him is requested. Payment in semi-annual installments is one of the elements of comparison in cases of overcrowding.

It is not permissible to pay the seriousness of the seizure and the price of the land except in the payment currency mentioned in the request. Not less than the down payment specified for each activity, and it was approved to add a mechanism to deal with investor requests to allocate lands for areas of 5 acres or less.

The Assistant Minister of Housing said that the Urban Communities Authority aims to sell a minimum of 337 plots of land through the “demand allocation” mechanism, with a total area of ​​1,350 acres, during the period from September 2021 until the end of June 2022.

He added that the authority has issued 750 ministerial decisions since mid-2014 to develop projects with an area of ​​200,000 feddans distributed in 37 new cities.

He pointed out that the authority has issued 180 ministerial decisions to develop projects with an area of ​​28,000 feddans since the beginning of 2021 until this September.

The Assistant Minister of Housing said that the total area of ​​the partnership projects contracts signed by the authority with real estate developers amounted to 25,000 feddans so far, distributed among 17 projects.

Abbas added that the urban development plan implemented by the state contributed to doubling the area of ​​the Egyptian globe from 7% in 2015 to about 13.6% currently, which led to a decrease in the unemployment rate from 13.2% in 2013 to 7.3% during the second quarter of 2021.

He said that the authority sets strict controls when allocating lands to investors and obliges them with specific timetables for implementation, in addition to requiring the developer to have a financial solvency of up to 30% of the value of the plot of land allocated to him.

The authority develops 17 projects in partnership with real estate investors, with an area of ​​25,000 acres

Abbas added that the “Urban Communities” had signed 20 contracts with investors to reconcile the conditions of their projects in the Northwest Coast region, and 6 ministerial decisions had been issued for projects covering an area of ​​1080 acres.

The Council of Ministers approved the President’s draft decision to reallocate 4 plots of land towards the northwestern coast, with a total area of ​​about 707,000 acres, for the Urban Communities Authority, to be used in establishing a new urban community on it.

“Urban Communities” seeks to establish a group of new fourth-generation cities on the northwest coast, including the new Ras El Hekma city, and to provide various residential, service and tourism activities.

The Assistant Minister of Housing indicated that the authority had determined the locations of 3 new cities in the northwestern coast, including the new Ras Al-Hikma city, which plans are being drawn up to start development during the next year.

Abbas said that the authority has allocated 260,000 plots of land within the axis of individual lands, “social, distinguished, and the most distinguished” since 2015, and new proposals will not be announced until after studying the position of the places that witness the needs of individuals’ lands, and the position of Upper Egypt cities is currently being studied. new to determine the possibility of offering.

The Assistant Minister of Housing believes that the real estate sector represents the largest sector that attracts employment, and includes large financial investments, considering that real estate development companies are a partner of the Urban Communities Authority in the development process, whether by allocating lands to develop projects in new cities or through partnership projects with developers.

Abbas added that the Corona virus crisis proved the strength of the Egyptian real estate sector and its ability to overcome the repercussions of the pandemic, as work continued on urban development projects that provided millions of job opportunities during that period.

On the digital transformation plan of the Urban Communities Authority, the Assistant Minister of Housing said that the spatial information system for urban management and smart governance is being developed through the smart system to deal with violations in new cities, with the aim of controlling urbanization.

He added that the first phase of the system will be implemented in the cities of 6th of October, Sheikh Zayed, and the 10th of Ramadan, with an emphasis on the use of communication and information technology to shift to urban management and smart governance in all sectors of the new city agencies.