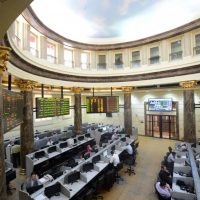 Jacob: The seventy index still possesses the largest liquidity ratios in the market

Ashmawy: The offering of “e-finance” will open the appetite of investors to pump liquidity

Stock exchange traders expected a positive performance for the market during the sessions this week, supported by the moves of the Economic Committee with the House of Representatives on the tax file, and the offering of the “e-finance” stock, with investors waiting to inject new liquidity into the market.

The EGX70 EWI index for small and medium stocks closed the week down by 2.2% at the level of 2662 points, and the egx30 capped index decreased marginally and negligibly closed at 12884 points.

Rania Yaqoub, Chairman of the Board of Directors of the Three Way Securities Brokerage Company, said that the main stock index witnessed a rebound process during the sessions of the past week and an attempt to consolidate at the level of 10,250 points.

She added that trading volumes are still weak in light of investors’ fear of the tax file, and the seventy index still possesses the largest percentage of individuals’ liquidity in light of the closing operations of marginal positions.

Yaqoub pointed out that the stock exchange is awaiting, during the coming period, the end of the subscription for the “e-Finance” share, which started last week.

Yaqoub advised investors to close marginal buying positions and keep part of the liquidity in portfolios.

Last week, the market capitalization amounted to 699 billion pounds, down by 0.61% from last week of 703.3 billion pounds. Shares accounted for 46.9% of the total trading value, while bonds grabbed 53.08% of transactions.

Moataz Ashmawy, managing director of Arabia Online Securities Brokerage, said that the tax file is at the top of the list of reasons affecting the stock market, in addition to other reasons represented in cancellations of executions, manipulators’ codes, and the auction session to determine the share price.

He pointed out that the economic committee’s moves with the House of Representatives this week could result in positive news for the market, the closest of which might be to postponing the capital gains tax until a good study.

He stated that the market needs to abolish the capital gains tax and not postpone it, and trading volumes are declining with time due to the state of fear among investors.

Ashmawy explained that the offering of the “e-finance” stock on the stock exchange will open the appetite of investors to pump liquidity, and positively affect the market in general.

He pointed out that the main index of the stock exchange aims to cohesion around the level of 10,500 points during the upcoming sessions, and advised the long and medium-term investor to stay away from marginal buying until the clarity of vision is better.

The market recorded trading values ​​of 21.3 billion pounds, through the circulation of 4.7 billion shares, by implementing 146 thousand buying and selling operations, compared to transactions worth 19.9 billion pounds at the end of the week before last, on 2.2 billion shares executed through 220 thousand operations.

Egyptians’ transactions recorded 83.6% of the trading value of listed shares since the beginning of the year, after excluding deals, and foreigners recorded 9.6% and Arabs 6.7%.

Foreigners achieved a net sale of 2.9 billion pounds, while Arabs recorded a net purchase of 2.03 billion pounds on listed shares after excluding deals since the beginning of the year.