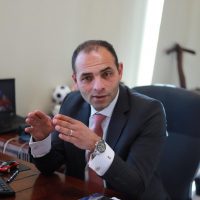 MEDA: Looking forward to launching specialized sector funds in Egypt within 3 years
Abu El-Saad: The volume of assets under management is currently 3 billion pounds in Egypt
226 million dollars in profits for the group in the first half

Azimut International is preparing to launch 3 new funds in Egypt, including one that is compliant with Islamic Sharia.

The company also seeks to launch specialized sector funds within 3 years after building a strong client base in Egypt during that period.

Ahmed Abu El-Saad, CEO of Azimut Egypt, revealed that the volume of assets under management in Egypt currently amounted to about 3 billion pounds, distributed among 3 funds, most of which are in the “Savings” and “Foras” funds, and the rest in the Luxembourg Fund.

In statements to Al Borsa, he added that Azimut Egypt aims to increase the base of managed assets to 4 billion pounds by the end of this year.

He pointed out that the Foras Equity Fund attracted about a thousand investors to the Egyptian Stock Exchange, within only two months of its launch at the end of last July.

He explained during a press conference held by the company on Tuesday, that the company is preparing to launch 3 new funds, the first of which is an investment fund within a month from now to be multi-issues in different currencies, and it will be under the name “Azimut Maturity” to be invested in debt instruments.

He explained that the other two funds that the company intends to launch before the end of the first half of next year in Egypt during the coming period, one of them will be Islamic and the other will be a traditional fund that uses financial technology in marketing.

He revealed the trend for investment funds specialized in certain sectors, and funds for financial technology, within the next three years, after building a large client base in Egypt.

He ruled out listing Azimut Egypt on the Egyptian Stock Exchange, but the company’s employees will contribute stakes in its shares.

In terms of returns, Abu Al-Saad explained that the Provident Fund achieved 9.9% annual returns, of which 44% returns on the Luxembourg Equity Fund.

In a related context, Jorgeira Meda, CEO of Azimut International Group, said that the company manages investments around the world worth $90 billion at the end of last August, explaining that customers exceeded 220,000 customers.

During a press interview held by the company yesterday, Meda added that the company has 250 investment units worldwide that work as a portfolio and fund manager for the group.

He pointed out that the volume of his companies’ funds in the Middle East exceeded $3.6 billion.
In a related context, he said that the company manages the largest global sukuk fund, which was established in 2013, explaining that this fund generates annual returns for its investors of 4.5% annually.

He explained that the company launched the Luxembourg Equity Fund this year, which currently amounts to $17 million, pointing out that the company aims to reach its size of $100 million by the end of 2023.

He stressed that the company seeks to provide an integrated asset management model, stressing that the group seeks to attract foreign capital to Egypt through its work in all countries.

The article “Azimut Egypt” is about to launch two new funds before the end of this year was written in Al Borsa newspaper.