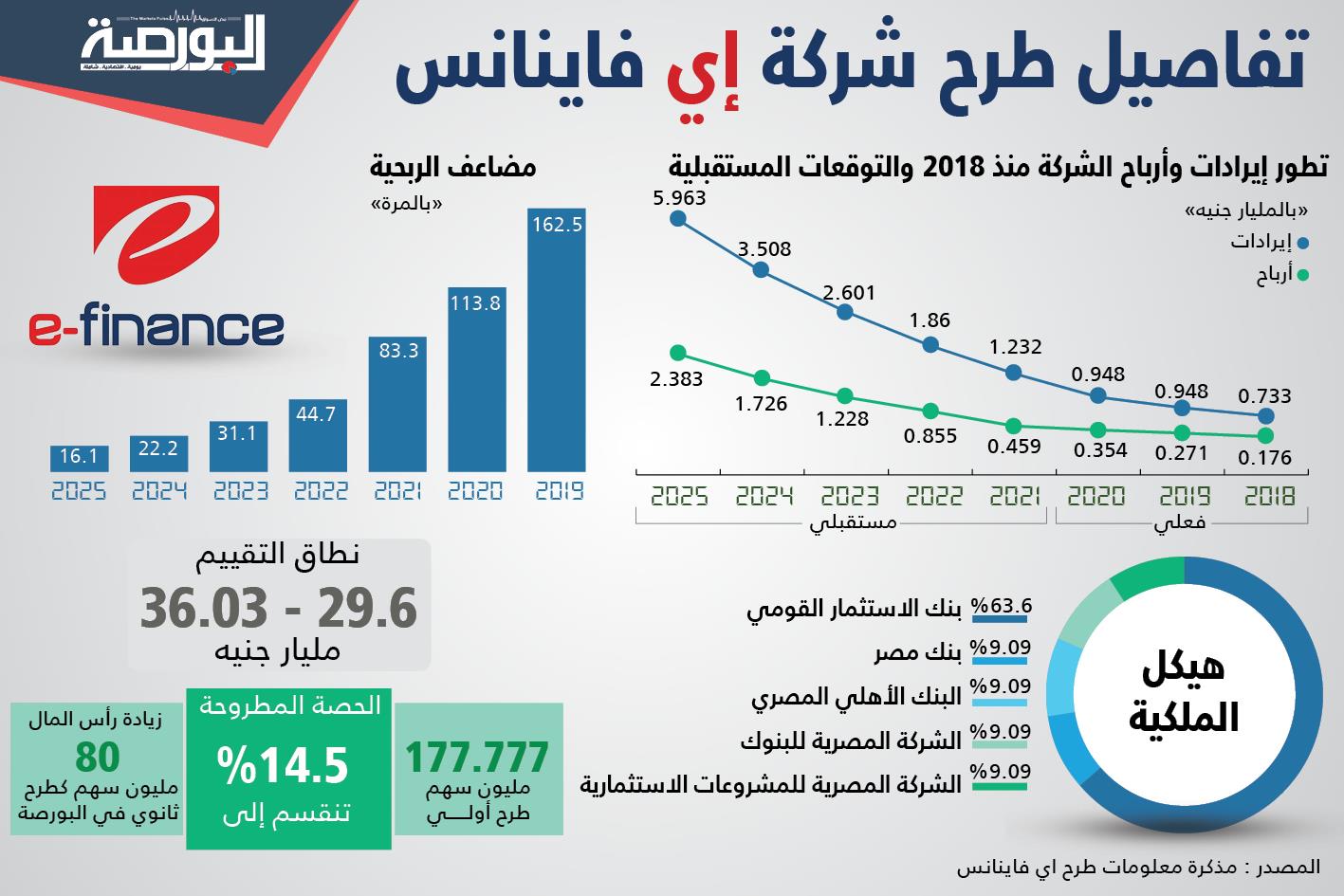 The Financial Supervisory Authority announced, and a letter was received from the company “E-Finance for Financial and Digital Investments” regarding its desire to increase the number of shares offered for sale to 417.78 million shares, representing 26.1% of the company’s total outstanding shares instead of 257.78 million shares, which represents 16.1% of the total Company shares.

The Financial Supervisory Authority explained that the justification for e-finance’s request came in light of the increase in demand for shares, which exceeded the offered shares several times.

She emphasized that pledges should be submitted to the Stock Exchange that the main shareholders’ retention rate in the company shall not be less than the percentage specified in accordance with Article 7 of the rules for listing and writing off securities for a period of no less than two fiscal years from the date of the offering, and a letter from the Misr Clearing Company stating the freezing in accordance with the aforementioned article.

Earlier, the Financial Supervisory Authority announced that it does not object to publishing the “Offering Prospectus” for the purpose of selling a maximum of 257 million and 777 thousand shares, which represents 16.1% of the total capital of E-Finance for financial and digital investments through offering in the secondary market (offering public and private).

On Wednesday, October 6, the company opened the door for receiving applications for subscription in the private placement tranche, which is scheduled to continue until October 11, 2021, and trading on the company’s shares will begin by October 20.

E-Finance for financial and digital investments announced that it achieved unprecedented success on the first day of the subscription after covering all the shares offered by investors.

The company stated, in a statement today, that it had opened the door for receiving subscription applications for the private placement tranche last Wednesday, which was scheduled to continue until next Monday, provided that trading on the company’s shares will begin on October 20, 2021.

She indicated that it is scheduled to be announced next Tuesday, the official price of the share, which was disclosed last Wednesday, at a price ranging between 12.50 pounds and 13.98 pounds per share.

E-Finance intends to offer 80 million shares of the current shares in a secondary offering on the Egyptian Stock Exchange and an initial offering of 177,777,778 ordinary shares, which amounts to a total of 16.1% of the company’s currently issued capital.

And she was The stock exchange listing committee approved the listing of the shares of “E-Finance for Financial and Digital Investments” with an issued capital of 800 million pounds, distributed over 1.6 billion shares, with a nominal value of 0.5 Egyptian pounds per share.

The listing will be represented in 8 issues in the listing table of Egyptian securities (shares), in accordance with the rules of listing and delisting securities issued by the decision of the Board of Directors of the Financial Supervisory Authority No. (11) on 22/1/2014 and its executive procedures and their amendments, in particular Article (1) Duplicate of them, with no dealing in the company’s shares during that period from the date of registration until the start of trading on these shares except with the approval of the Authority.

The registration shall be considered null in the event that the company does not offer its shares within one month from the date of its registration with the Authority, and items (1, 2, 3, 7) of Article (7) of the listing rules are fulfilled, unless this period is extended with the approval of the Authority in the cases it estimates. .

The Listing Committee approved that the company’s shares be listed on the stock exchange database as of tomorrow, Tuesday, as follows: 1.6 billion shares x 0.5 pounds, with a total value of 800 million pounds.

The registration committee stated that a “Ticker Symbol” will be allocated to the company, which is EFIH.CA, and that the company will be housed in the “Communication, Media and Information Technology” sector.

A memorandum of evaluation of the offering of “e-finance” company, which was reviewed by the “Boursa”, revealed that the scope of the company’s valuation ranges between 29.6 and 36 billion pounds.

The memorandum prepared by CI Capital, which was chosen to participate in the promotion of the offering, along with Al-Ahly Pharos and Renaissance Capital, as managers of the offering, indicated that the valuation represents a profit multiplier of 44.7 times the profits of 2022.

E-Finance plans to offer 14.5% of its shares, through two tranches, the first for about 177.77 million shares, by increasing the capital in the primary market, as well as selling 80 million shares in the secondary market.

The valuation note expected that the net profit of E-Finance in 2024 would reach 1.7 billion pounds, to reach 2.38 billion pounds by the end of 2025.

E-Finance’s valuation range is equivalent to an average P/E of 83.3 times for 2021’s earnings, and 44.7 times for next year’s earnings.

Sources revealed to “The Stock Exchange” that the offering may be implemented by the end of next October, or early November at the latest, which will raise about 5.22 billion Egyptian pounds, equivalent to 330 million dollars, if the offering is at the upper end of the price range.

The company, which was founded in 2005, said it is the only entity authorized to operate government financial networks, including processing and settling payment, collection and settlement transactions.

According to 2020 revenues, e-finance’s digital operations accounted for 89% of the revenues, while the rest of the company’s revenues were distributed between 7% for digital cards, 2% for the “Khalis” platform, and 2% for the “Enable” platform.

The e-finance offering marks the beginning of the return of the government offering program, which was suspended after offering a share of “Al Sharqiya Eastern” 3 years ago, due to market conditions and global markets.

Sources close to the offering indicated that there is a great demand from investors for the company, according to the initial promotions that took place this week.

The offering comes in light of multiple government initiatives to support digital transformation, and 100% of government salaries have become automated, while 70% of government services payments, including taxes, customs and services, are made digitally, according to the memo seen by the “Boursa”.

The Central Bank of Egypt said that every 10% increase in digital transformation raises the Egyptian gross domestic product by 1.5 billion pounds, and creates 200,000 jobs.

This indicates great growth opportunities for the company, as non-cash operations represented only 4% of the total transactions in the Egyptian market, which is among the lowest rates in emerging markets, until 2017.

The article, due to high demand, was written in the Al Borsa newspaper.