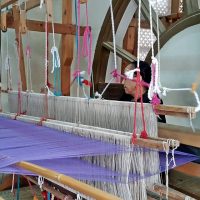 The “Arabia and Bolvara Spinning and Weaving” company said that it is studying restarting the third unit at a cost of one million pounds, which was working and making a loss, and a decision was taken to stop it.

The company added that the operation is an added value besides the second unit to the new Hall C factory, in which the machines were renewed with new spare parts, raising their efficiency and equipping the buildings of the new Al-Anir, all in order to increase the company’s productivity, which results in maximizing revenues to cover and repay the company’s debts.

This came in response to what was published in one of the daily newspapers entitled “Bolvara adopts an ambitious strategy to reduce losses, pay off debts and boost growth.

The losses of the “Arabia and Bolvara Spinning and Weaving” company decreased by 55.1% during the first quarter of this year to reach EGP 2.81 million, compared to a net profit of EGP 6.26 million in the comparable quarter of the last fiscal year 2019-2020.

Al-Arabiya and Bolvara Spinning and Weaving Company achieved a decline in net losses during 2019 by 18.75%, reaching losses of 5.2 million pounds, compared to 6.4 million pounds in 2018.

The company explained that due to the lack of liquidity, it was relied on operating for others, which amounted to about 99% of the total revenues of the activity.

The article “Bolvara” is considering restarting a production unit at a cost of one million pounds was written in Al Borsa newspaper.