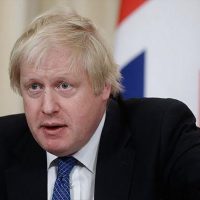 British ministers plan to agree on an extraordinary post-Brexit turnaround that would allow foreign truck drivers to return to the UK to stave off shortages threatening the country’s food and fuel supplies.

British Prime Minister Boris Johnson directed – during his meeting with ministers, according to what was reported by the British newspaper “The Guardian”, today, Saturday – to deal quickly with the situation to prevent the aggravation of the crisis in the country from food shortages, in an attempt to agree on the issuance of short-term visas allowing thousands more. of truck drivers from abroad to come to the UK.

In a related context, Edmund King, head of the British Automobile Association, warned in a statement today against the rush to buy fuel and its products out of panic, stressing that the current supply crisis is only a temporary problem.

The newspaper pointed out that the scene of long queues in front of gas stations continued until this morning in various parts of Britain, despite calls by ministers and the police for prudence, adding that some of the largest suppliers in the country began stockpiling fuel, as the “EG” group set a maximum of 30 pounds per customer. At about 400 fuel stations, several gas stations belonging to other companies such as “Shell” and “Esso” were closed.

It is worth noting that the shortage of up to 100,000 drivers of heavy goods vehicles, which has been exacerbated by the epidemic and Britain’s exit from the European Union, has affected the food sector and other industries, and the British Retail Federation warned yesterday that major disruption ahead of Christmas is “inevitable” unless it is done. The problem will be contained within the next 10 days.

The article Britain intends to issue temporary visas to foreign truck drivers to solve the gas and fuel shortage crisis was written in Al Borsa newspaper.