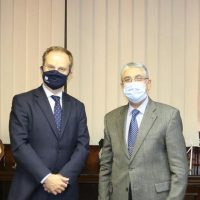 Mohamed Shaker, Minister of Electricity, met with Gareth Yale, the new British ambassador to Egypt; To discuss ways to support and enhance cooperation in the electricity and energy sector between Egypt and Britain.

Gareth Bailey, British Ambassador to Egypt, announced his country’s desire to increase the volume of cooperation with Egypt and increase the contribution of renewable energy until it reaches zero emissions.

He praised what Egypt has achieved in the field of combating climate change, and explained that the coming period will witness strengthening cooperation and exchanging visions before convening the Climate Change Convention conference to achieve the desired goals.

Mohamed Shaker, Minister of Electricity, said that the plan set by the ministry to produce 20% of renewable energy sources from the total electric capacity produced by 2022, but the ministry was able to achieve this percentage this year, and the currently produced capacities amount to 6,378 megawatts.

It is planned that the share of renewable energy will reach more than 42% by 2035, and the necessary studies are being conducted to increase this percentage.

He added that the sector has taken a number of important measures to benefit from the huge potential of renewable energy, according to a number of mechanisms to encourage the participation of the private sector.

Shaker pointed to cooperation with international companies to start discussions and studies to implement pilot projects for the production of green hydrogen in Egypt, as a first step towards expanding in this field to the possibility of exporting.

He explained that the Energy Strategy 2035 will be updated to include green hydrogen as an energy source, stressing the sector’s readiness to cooperate with various parties in this field.

Shaker said that the electricity sector is currently working on improving and developing the transmission and distribution networks, including high-voltage transformer stations and control centers, in addition to smart networks to enhance and strengthen the electrical network in order to absorb the new capabilities added from renewable energy.

The article “Britain wants to increase cooperation with Egypt in renewable energy projects” was written in Al Borsa newspaper.