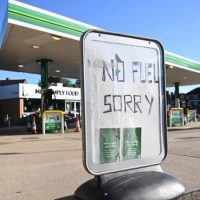 The British government said on Friday it would deploy nearly 200 military personnel, including 100 military truck drivers, from Monday to help deliver fuel to gas stations and help address the shortage of drivers for heavy goods vehicles.

Many stations in Britain were still without fuel on Friday, after a week of panic buying, wrangling in station yards and drivers hoarding fuel in water bottles, as supply chains reached breaking point under the weight of a shortage of truck drivers.

Ministers in Prime Minister Boris Johnson’s government have been insisting for days that the crisis is abating or even ending, but retailers have said more than 2,000 stations are running out of fuel and Reuters reporters across London and southern England have said dozens of stations remain closed.

The government said military personnel were currently training at transport sites across Britain.

“Although the situation appears to be stabilizing, our armed forces are there to fill any important vacant positions and help keep the country moving by supporting industry to deliver fuel to stations,” Defense Secretary Ben Wallace said.

On Sunday, the government announced a plan to issue temporary visas to 5,000 foreign truck drivers and 5,500 poultry workers to ease the shortage.

The article British government allows the army to help deliver fuel to stations was written in Al Borsa newspaper.