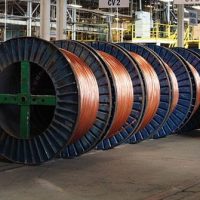 And pushed this high percentage of components, to a jump in cost, coinciding with the growth of the price of the red metal globally for the 11th consecutive month.

Engineer Atef Abdel Moneim, head of the Electrical Tools and Cables Division at the Chamber of Engineering Industries, said that copper is a major component in the manufacture of cables and transformers, and a minor component in many other products.

The increase in its prices is a new burden on the industry and the economy, especially since Egypt is a producer of this crude.

The red metal is trading at record levels on the London Stock Exchange, the highest in 10 years, to touch 9200 dollars per ton. These prices are the result of a continuous increase for 11 months in a row.

Abdel Moneim pointed out that copper represents 80% of the cable composition, and 40% of the transformer configuration, explaining that the increase in raw material prices was not limited to copper, but included tin and various components, on the basis of which the cost increased between 30 and 40%.

Ashraf Ahmed, vice chairman of the board of directors at El Sewedy Electric, a cable manufacturer, said that copper prices rose to record levels in the last two weeks; To close to $ 10,000 a tonne, compared to $ 6,000 last year.

Most of the factories in the world reduced their production capacities last year, coinciding with the outbreak of the epidemic, but with the decline in supply and supplies, factories resorted to returning again to manufacture by force and put pressure on raw materials and their prices rose.

Ahmed pointed out the high prices of lead, aluminum and plastic materials of all kinds, and thus affected the prices of products in the market.

He explained that the new increases in product prices cause problems with customers because they do not accept the large percentage of the increase, especially for those who have contracts.

Engineer Osama Al-Erqsousi, a member of the Electrical Tools and Cables Division in the Chamber of Engineering Industries of the Federation of Industries, said that the price of copper has now risen to $ 9200 per ton, an increase of $ 700 over the beginning of the year, as it was trading at $ 8,500 per ton.

He added that the price per ton was recorded at the beginning of last year at $ 6,500 … However, crude witnessed a successive increase for 11 months in a row.

He continued, “The cost has increased by 20% since the beginning of the year, which is the same rate as the price increase in the market,” pointing out that there is a shortage of supplies in the local market during the current period; As a result of the tendency of some suppliers to store crude to take advantage of the continuous increase in price.

He stressed the necessity to oblige exporters not to export raw materials in the form of bars or ingots, but rather obligate them to have an added value on the raw material to provide the raw material locally and prevent the smuggling of scrap.

The article Cable prices are on fire as copper rises was written in the Al-Borsa newspaper.