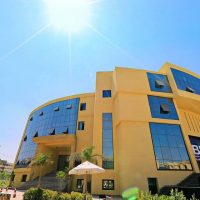 The Cairo Investment and Real Estate Development Company revealed the issuance of a presidential decree to establish a private university called “Badr University” in Assiut.

The company explained that, according to the decision, the university will have a private legal personality and will be based in the city of Nasser, west of Assiut.

The university consists of 17 colleges, and it represents one of the activities established by the company, noting that it has completed the construction work of the university, stressing that it will operate 4 to 6 colleges by the middle of the 2021-2022 academic year.

The Ordinary General Assembly of “Cairo Investment and Real Estate Development” approved a cash distribution of 17.2 piasters per share for the profits of the last fiscal year, with a total value of 100 million pounds.

The general assembly relied on the results of the company’s business and the income statement, provided that the cash distribution is disbursed within a month from the date of the general meeting.

The general assembly approved the company’s guarantee for subsidiaries and sister companies regarding loans granted to these companies.

The Board of Directors of “Cairo Investment and Real Estate Development” agreed to proceed with the procedures for obtaining a loan of 260 million pounds from an Egyptian bank.

Obtaining the loan comes to finance new projects for the coming period, and the Board decided to authorize the Chairman or Managing Director to sign the loan contracts. In its meeting, the Board of Directors was informed of the executive position of the projects being implemented within the framework of the company’s expansion plan.

Cairo Investment Company, in cooperation with El Sewedy Capital Holding Company, aims to establish a new university in New Damietta after obtaining a license for a plot of land from the New Urban Communities Authority.

The Cairo Egypt Company for Educational Facilities, which is a 60% partnership between Cairo Investments and El Sewedy Capital, has been allocated a 58-acre plot of land in New Damietta to establish a new university.

Cairo Investment Company indicated that the investment cost of the project is expected to reach 2.5 billion pounds, with the first phase to open in September 2023.

She stated that the new university will provide more than 16 colleges to serve more than 25 thousand students from all over the delta region.

Mohamed El-Qalla, CEO of Cairo Investment Company, said that the entry into the delta region came due to the huge demand for education service provided by the two parties in the partnership.

Haitham Sabry, CEO of El Sewedy Capital, indicated that the company directed its focus to other governorates other than Cairo and Alexandria, in light of the company’s vision with Cairo Investment Company regarding the development of the educational process to keep pace with global developments.

The article “Cairo Investment” introduces 17 new majors at Badr University in Assiut, which was written in Al Borsa newspaper.