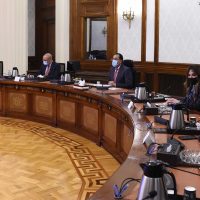 Madbouly: An assignment by the president to provide units for all detainees in the first phase of the project

The Butcher: Coordination with the “business sector” to implement housing units on its lands under the partnership system

The government agreed with the Central Bank to provide 60 billion pounds to finance the implementation of housing units, on the initiative of the President of the Republic, to “house all Egyptians.”

Dr. Mustafa Madbouly, Prime Minister, held a meeting today; To follow up on the executive position of the President’s initiative “Housing all Egyptians”, in the presence of Dr. Asim Al-Jazzar, Minister of Housing, Utilities and Urban Communities, May Abdel-Hamid, Executive Director of the Social Housing Fund and Real Estate Finance Support, Rana Badawi, Deputy Governor of the Central Bank for Supervisory Instructions, and Ali Al-Sisi, Sector Head The general budget of the Ministry of Finance.

The Prime Minister stressed the need for coordination between the Ministry of Housing and the Central Bank regarding the provision of the required funding to implement the initiative of President Abdel Fattah El-Sisi, President of the Republic, to “house all Egyptians”, through which housing units are implemented for low and middle-income segments.

The Prime Minister referred to the agreement made with the Governor of the Central Bank, to provide 60 billion pounds, to finance the implementation of housing units for that initiative, after taking the necessary measures in this regard and the approval of the bank’s board of directors.

The Prime Minister also stressed the importance of continuing coordination with ministries and government agencies that have land in the governorates and old cities, to build housing units on them as part of the initiative, through a partnership system, and to provide them to those wishing to reserve them, with the speedy submission of a study in this regard by the Social Housing Fund.

The Prime Minister indicated that President Abdel Fattah Al-Sisi has been mandated to provide housing units for all the detainees in the first phase of the project, which was put up several weeks ago, who meet the conditions.

He said that after the counting and identifying the beneficiaries, those who did not meet the conditions could be given the option to provide them with housing units, but at prices and conditions other than the conditions of the units supported by this project.

Dr. Assem Al-Jazzar, Minister of Housing, Utilities and Urban Communities, indicated that the ministry had offered a number of housing units within the initiative of the President of the Republic to “house all Egyptians” for the low-income in a number of cities, including New Obour, Sadat, New Minya, New Mallawi, and May 15 , October Gardens, New Qena, New Sohag, Tenth of Ramadan, New October 6, Capital Gardens, and New Aswan.

He added that a number of other housing units were offered in the framework of this initiative for middle-income Prime Time Zone in a number of cities, including 6 October, October Gardens, the tenth of Ramadan, New Alamein, New Rashid, Nasser, New Aswan, the Capital Gardens, New Minya, and Bani New Sweif, and May 15th.

Al-Gazzar emphasized the continuation of coordination with the Ministry of the Public Business Sector, to take advantage of a number of plots of land belonging to the Ministry, as part of the initiative of President Abdel Fattah El-Sisi, President of the Republic, “Housing all Egyptians”. The public business sector, with a partnership system.

The article “Al Markazi” provides 60 billion pounds to implement the units of the “Housing All Egyptians” initiative, it was written in Al-Borsa newspaper.