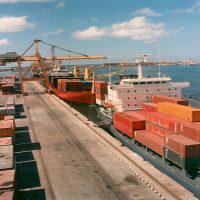 The “stock exchange” obtained the details of the ongoing negotiations between the Ministry of Transport and the global “CMA-CGM” company to enter as a strategic partner in a number of the ministry’s projects in sea ports, especially Alexandria port.

A source closely related to the negotiations said that the company that owns one of the largest global shipping lines has agreed in principle with the ministry to obtain the right to manage and operate the multi-purpose terminal at Alexandria Port for a period of 10 years, expecting the contract to be concluded within a month after the completion of some legal procedures and reviews.

The source explained that «CMA – CGM» seeks to enter as a partner investor in the project with a share that has not yet been determined, indicating that the matter is welcomed within the Ministry of Transport, as the partnership will give weight to the project, in addition to being reflecting the value of the station and confirming the validity of the studies prepared by it. The ministry before starting to implement it.

He pointed out that the Global Shipping Line Company aims to partner with the work of the superstructure, including equipment, yard winches, berth and facilities.

The source explained that the cost of the project is estimated at 7 billion pounds, of which 2.5 billion pounds are to purchase equipment and prepare the plant for operation in the first quarter of 2022.

He pointed to the completion of 51% of the project implementation in terms of construction work to implement the basic elements of the quay wall, and that the general plan has reached its final form in terms of defining storage places, squares and administrative places.

He explained that the utility network design will be completed within a period of 2-3 months.

He explained that the terminal is planned to handle the handling of 1.5 million containers annually, in addition to one million tons of general cargo and 100,000 cars, and it will be implemented on berths 55 and 62 in Alexandria Port on an area of ​​500,000 square meters at the back.

“CMA CGM” is the fourth largest global shipping line company, and it owns a fleet of 502 merchant ships, operates 45 stations worldwide, and has an annual volume of 26.1 million containers annually.

The article “CMA” obtained the right to manage the multi-purpose terminal in Alexandria Port for 10 years. It was written in the Al-Borsa newspaper.