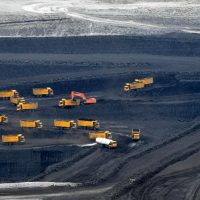 Coal contracts traded in China rose during Thursday’s trading to a record level, with the world’s second largest economy facing a fuel crisis ahead of a week-long public holiday.

Thermal coal futures traded on the Zhengzhou Commodity Exchange jumped 6.5% to close at 1,393.6 yuan ($216) per ton, its highest ever, Bloomberg reported, and coke coal contracts on the Dalian Commodity Exchange rose 9.3% to 3,290.5 yuan per ton. , which is also standard.

Coal prices have more than doubled this year amid soaring demand for electricity from the country’s factories, slowing production growth from mines, and rising prices slowing power generators in parts of the country, leading to shortages and even blackouts.

The article The rise in coal contracts traded in China to a record level was written in Al Borsa newspaper.