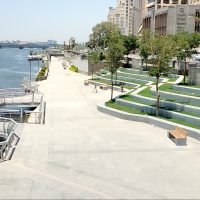 Al-Ashry: The company aims to officially open the first phase of the project during the second quarter of 2022

Consul Masters is implementing the final preparations for the “People of Egypt Walk” project, in preparation for the initial opening of the project at the end of next December, coinciding with the celebration of the New Year’s Day “Christmas”.

Malak Al-Ashry, a member of the Board of Directors of Consul Masters Consulting, said that the company aims to officially open the first phase of the “People of Egypt Walk” during the second quarter of 2022, a week before the start of the next Ramadan season.

Al-Ashry added, in statements to Al Borsa, that the National Bank of Egypt obtained the advertising space along the walkway, to announce the most important “national, sports, and international” events throughout the year, under the auspices of the bank.

She explained that the company is preparing during the current period to address the well-known real estate and communications companies in the Egyptian market; A letter will also be sent to car brands in the local market to participate in the project by displaying cars and their specifications inside the walkway.

Al-Ashry said that the company began contracting with brands to rent kiosks within the “People of Egypt Walk” project, starting in mid-September.

She added that the rental value of commercial kiosks in the walkway ranges from 40 to 60 thousand pounds per month, depending on the area of ​​the kiosk, noting that some foreign brands, including “American, Libyan, and Mexican”, expressed their desire to rent kiosks inside the project.

She explained that the length of the first phase of the “People of Egypt Walk” is about 1.8 km, which is the area overlooking the hotels area, which is located between Imbaba Bridge and May 15 Bridge.

Al-Ashry said that the City Edge Real Estate Development Company, representative of the Urban Communities Authority that owns the “People of Egypt Walk” project, has contracted with the “Consul Masters” company to manage and operate the first phase of the project, which is a new park that adds a special beauty to the Nile, and the duration of the contract reaches Approximately 9 years, renewable with the consent of both parties, as stipulated by law.

The contract between the two companies also includes the provision of commercial, tourist, entertainment and service activities such as restaurants, cafeterias, shops, recreational areas, garages and seating areas for receiving visitors to the walkway, in addition to many other activities such as entertainment theatre, car parking areas, a river marina and an open service area.

The company also has a precedent that allows it to prepare plans for establishment, operation, ownership and leasing of tourist facilities, commercial centers and malls with the best innovative systems and global technology in terms of operation and maximizing profitability, in addition to holding and organizing exhibitions, economic conferences and events.

The company owns the exclusive marketing right for more than 65 local brands and more than 80 international brands, and has branches and representative offices in several Arab countries.

In a related context, Malak Al-Ashry, President of the “Bizenex Holding Group”, said that the new edition of the “Bisnex International Investment and Commercial Agencies” exhibition, during the current year, will provide real investment opportunities in cooperation with various state institutions and under their auspices to attract entrepreneurs and provide job opportunities. .

She added that the exhibition will witness this year many strategic partnerships with the partners of the success of the previous sessions, after the great success achieved in the first, second and third sessions of the exhibition.

She explained that the company aims in the new session to attend a large number of senior speakers, consultants and experts in marketing and retail, locally and internationally, and in the presence of a number of exhibitors, to present their ideas, experiences, and the latest global methods on how to make profit from their brands in a constantly changing market.

She said that the exhibition will witness the participation of the African sector in accordance with the protocol signed in cooperation with the Egyptian-African Businessmen Association during the last period.

Al-Ashry added that the company is seeking to organize a copy of the “Biznex International Investment and Commercial Agencies” exhibition during 2022 in Nigeria, to be announced during the new session of the exhibition.

She explained that the exhibition, in its new session, will witness the addition of a pavilion dedicated to presenting the ideas and projects of new emerging companies in the Egyptian market, in order to provide an opportunity for entrepreneurs to discuss their ideas; The exhibition also provided them with that at reduced prices for their presence in the exhibition.

The article “Consult Masters” prepares for the initial opening of “Ahl al-Masr Walk” with the “Christmas” celebrations was written in Al Borsa newspaper.