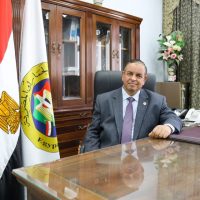 The Customs Authority has postponed the requirement for companies to pay the tax differences and fees due on the amounts paid for property rights “royalties” for production input letters that were previously released and the existence of accumulated debts that have not been paid until the establishment of regulatory controls and unified mechanisms for dealing with foreign companies, up to the end of next December.

The head of the Customs Authority indicated in executive instructions that the Stock Exchange obtained a copy of it to the relevant customs departments, that a higher committee is currently being formed by a decision of the Minister of Finance to set unified rules to deal with this matter in order to improve the internal investment climate environment.
The instructions also stipulated the postponement of taking seizure procedures on these companies to meet the tax differences due on the royalty item, provided that the categorical measures of limitation have been taken.

The “Boursa” had published last April that the Ministry of Finance and the Customs Authority are moving to set controls for calculating the tax on royalties of foreign companies, and they addressed the International Monetary Fund and the World Bank for technical assistance in the implementation processes.

This is related to the fees received by foreign companies in exchange for the use of their trademark or any of their rights in the local market, the most famous of which is the franchise contract.

Government sources told the “bourse” that the World Customs Organization was addressed regarding the controls and foundations for applying royalties to companies.

The sources added that discussions have been held with representatives of companies during the past weeks, including companies that have paid their amounts and others that have not yet paid their claims, pending the establishment of controls and instructions on how to calculate the customs tax on royalties for production requirements imported from abroad.

The sources indicated that consultations were held about not imposing a customs tax on royalties on re-exported goods and deducting advertising, marketing and advertising expenses from the customs tax, in addition to deducting the paid royalty from income tax, and it will also be applied to actual sales only for subsequent audits.

The article “Customs” postpones the request for royalties by foreign companies until the end of the year until controls are established for dealing, which was written in Al Borsa newspaper.