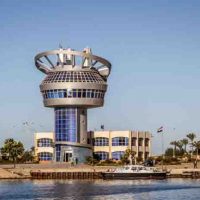 Damietta Port confirmed that 27 container ships and general cargo were handled during the day.

It confirmed that the total container export movement amounted to 1,243 TEUs, including vegetables, agricultural crops and fruits, which are exported to the Emirates, Saudi Arabia, India, America, Italy, France, Taiwan, Belgium and Spain, while the number of incoming containers reached 358 TEUs, and the number of transit containers was 1,703 TEUs.

The balance of the grain silo for the public sector in the port reached 113,491 tons, while the balance of wheat in the private sector stores reached 97,454 tons.

Also, 2 trains with a total tonnage of 2,664 tons of wheat left for the silos of Shubra and Kafr El-Sheikh, and 1 train consisting of 25 vehicles, after emptying 25 40-foot containers, came from Alexandria, while the movement of trucks handled 3,827 trucks.

The article was written in the Damietta port that handles 27 container and general cargo ships.