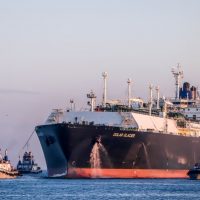 Damietta Port Authority announced the restoration of the frequency of liquefied gas tankers to the port again after an 8-year hiatus.

The authority said in a statement that the port received the liquefied gas tanker (GOLAR GLACIER) coming from Singapore, which flies the flag of the Marshall Islands, with a length of 276 meters and a width of 45 meters and a draft of 14 meters, as it will ship 60 thousand tons of LNG (equivalent to 158 thousand cubic meters) to Bangladesh.

The team, engineer Kamel, Minister, Minister of Transport, directed the Damietta Port Authority to follow-up on the field the process of entering the ship and its anchorage on the berth of the Segas company and demanded that the state of readiness be raised and the application of all insurance and safety procedures followed while dealing with such type of ships, and even their anchorage and attachment to the terminal berth using the owned locomotives To the authority and then proceed to leave safely.

It is noteworthy that the gas liquefaction and export station in Damietta Port is considered one of the largest gas liquefaction stations in the Middle East, and the government seeks to work on strengthening Egypt’s position as a regional center for gas and energy trading in the eastern Mediterranean region.

The article Damietta Port receives the first ship to export liquefied gas after an 8-year hiatus. It was written in the Al-Borsa newspaper.