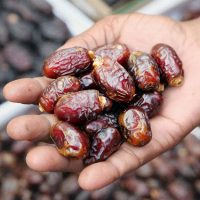 «Shark»: Hopes are placed on the launch of the Oasis product

Shali Dates: Export orders are delayed for the new season

The prices of New Valley dates have risen and reached record levels, and the demand for the export product has been delayed this year, in light of the presence of a large stockpile in Morocco, the largest importer of Egyptian dates, while the sector is counting on offering the Bahariya Oasis crop within days to reduce the price.
Mohamed Al-Qarsh, head of the Dates Committee at the Export Council for Food Industries, said that the prices of the new crop of New Valley dates range between 16 and 17 thousand pounds per ton, compared to a price ranging between 10 and 12 thousand pounds last year.
He explained that the reason for this rise is the consumption of large quantities during last year’s season in light of the increase in local demand for the product and the tendency of a large segment to healthy products, especially dates, which are no longer limited to the month of Ramadan, which made the market thirsty to launch the new product and started at high prices.
He explained that the price hikes will have a negative impact on exports in light of the large stocks in the Moroccan market last year from various countries such as Egypt, the UAE and other countries.
He mentioned that date exports recorded 44,000 tons last year, while the sector aims to reach 50,000 tons this year.
He pointed out that producers and exporters of dates are hoping to reduce prices in the coming days with the launch of the Bahariya Oasis product, which is currently harvested, to control the market and export large quantities of it to East Asian countries.
Mostafa Youssef, CEO of Shali Dates Company, said that the new Siwa Oasis dates prices rose by between 20 and 25%, and the price of a ton started the current season at about 10,000 pounds, compared to 7.5 thousand pounds last year.
He explained that the rise in prices caused a state of concern for exporting companies in light of the delay in demand and the contracting of export orders, unlike the past years, when the export season started early.
He pointed out that some companies have completed about 50% of their manufacturing volume from the new season at high prices, and if crop prices drop, the matter will cause losses for companies and traders and confusion in the market.
He explained that the export season usually started in mid-August through orders and contracts, and supplies are made during the period from mid-October to January, but demand is still limited compared to previous years in light of the saturation of the largest market in Morocco.
Hesham Al-Masry, Chairman of the Board of Directors of Orient Group, added that the company aims to export 18,000 tons this season, and the price hike during the current season affects the competitiveness of the Egyptian product.
He continued that the company added a new production line for dates, next to a modern filling line that will operate at the beginning of the current season.
He pointed out that the Egyptian dates have many competitors, such as the Iranian and Iraqi market, in addition to the UAE, Tunisia and Saudi Arabia.
Imad Shehata, Chairman of the Board of Directors of Al-Amal Company for Agricultural Crops, explained that the external price of a ton of dates ranges between 900 and 1500 dollars for some varieties, and there are significant increases in shipping and packaging prices, in addition to the fees imposed on dates from the New Valley Governorate when any quantity of up to 600 pounds per ton is released. .
He added that the company aims to export 10,000 tons during the current season, with a growth of 10%, compared to the last season, and it aims to expand in some markets, such as the European market, in addition to traditional markets. The company has a production line with a capacity of 120 tons per day.