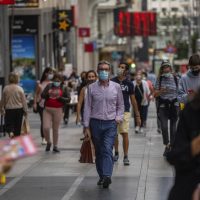 It seems that the bright economic outlook for Europe, with the advent of anti-corona vaccines, is also accelerating the timetable for a new threat.

As investors prepare for economic growth, they are also preparing for the inevitable outcome, which is the withdrawal of emergency financing to the European Central Bank, a move that would pit the region’s most indebted economies – including Italy – against market forces that they cannot cope with.

Citigroup is preparing to gradually cut bond purchases in early June, while M&G Investments says it is time to start shorting subordinated debt.

Borrowing costs in the Eurozone were not separated from risks, due to the dramatic actions taken by the European Central Bank over the past year.

Much of the region is recovering from the worst recession since at least World War Two. Deficits and debt have risen to staggering levels, Bloomberg News reported.

A decade ago, the debt crisis in the Eurozone caused its yields to rise more than 40%.

“You will only get temporary relief from credit risk in European sovereign bonds when you are in an emergency situation,” said Eric Lonergan, director of funds at M&G Investments.

“The problem comes when you get out of the state of emergency, because you go back to the market forces in your bond market … and some of these numbers look really bad … and it is ironic that Europe is vulnerable to a recovery,” he added.

The rise in eurozone debt is mostly due to the pandemic bond-buying program launched by the European Central Bank, worth € 1.85 trillion (equivalent to $ 2.2 trillion). This helped boost investor money.

And over the past year alone, Italian bondholders have yielded more than 10%, according to Bloomberg Barclays indices, and they would have nearly doubled their money over a decade.

The head of fixed income at Egon Asset Management, Hendrik Tuch, says the country is able to refinance debt at much lower returns due to the European Central Bank, so the crisis was somewhat a blessing in disguise for Italy.

Although European Central Bank President Christine Lagarde said recently that it would be “premature” to talk about easing subsidies, there is controversy over what should be done and how such a step might be taken.

“Bloomberg” quoted officials familiar with the matter as saying that some policymakers are ready to stir up controversy at the June meeting regarding the need to start the decline of the emergency procurement program for the epidemic in the third quarter of the year.

Despite Lagarde’s reassuring words, such talk will increase investor focus on Judgment Day.

Without emergency support, the focus will return to debt in Greece, Italy and Spain, which have ballooned further in 2020 due to necessary spending on health and crises, and whether it can be controlled.

At the moment, European Union member states are preparing to spend the money coming from the bloc’s economic recovery fund. It is scheduled to start disbursing funds around the middle of this year.

Draghi, the former president of the European Central Bank, was credited with saving the euro during the recent debt crisis.

But at a time when this stimulus contributes to the achievement of the economic recovery, there is an open question about whether this stimulus will generate sustainable growth strong enough to effectively get rid of Italy’s huge debt pile, which is currently estimated at 160% of GDP?

And the agency “Fitch” credit rating warned, in April, that the debt-to-GDP ratio in Greece will remain above 200% this year. Any failure to reduce them may result in a negative rating.

Another key question is when the European Union might re-impose fiscal rules that were suspended during the pandemic? What form will it take?

While the fiscal situation in some countries must be addressed, excessively stringent targets, for example in relation to deficits, can do more harm than good by absorbing life into economies.

For the European Central Bank, another dilemma will be while grappling with the challenge inherent in the eurozone, which is to establish monetary policy for 19 countries with vastly different economic conditions, inflation, unemployment, and debts. If policy tightening begins, the peripheral countries will be the losers, making financing their huge deficits even more difficult.

The article, debt-ridden European countries unprepared to take on the markets after the stimulus was withdrawn, was written in the Al Borsa newspaper.