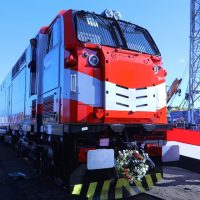 Source: Weather factors, fluctuations and repercussions of the Corona virus affected the arrival of the shipment

Alexandria Port is preparing to receive the last batch of 10 tractors from the rail tractors deal manufactured by the American General Electric Company at the end of next week.

An official with the Railways Authority said that the last batch was scheduled to be received during the past month, while the repercussions and precautionary measures for the Corona virus prevented it from arriving, as well as the weather conditions that affected its arrival and its waiting at sea.

Last September, Alexandria Port received the fifth batch of tractors manufactured by the company in the United States of America, with a total of 30 tractors. With the arrival of the fifth batch, the total number of tractors that have reached so far from the deal becomes 100 tractors.

The Railway Authority contracted with the American General Electric Company to manufacture and supply 100 new tractors for the railway before increasing it to 110 tractors, in addition to rehabilitating 81 out of service tractors and providing the necessary spare parts for them, in addition to a 15-year maintenance contract at a total cost of $ 602 million. .

The head of the authority pointed out that the deal is the largest and largest in the history of Egypt’s railways, stressing that the ministry has clear strategic plans to achieve a major leap in the railway system.

The Ministry of Transport monitored investments for railway projects during the period from 2014 to 2024 amounting to about 142 billion pounds, representing the cost of purchasing new wagons and tractors, modernizing the current fleet of trains, modernizing signaling systems on railways, and renewing some stations.

The article supplying the final batch of General Motors tractors for the railroad next week was written in Al Borsa newspaper.