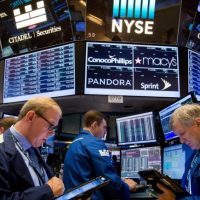 The US stock indices dominated the decline at the close of Monday’s session, while “Dow Jones” rose alone, with Treasury yields rising to the highest level since June.

Wall Street was subjected to downward pressure as the 10-year Treasury yield rose 1.5 percent for the first time since last June, with economic optimism and fears of accelerating inflation.

Major technology stocks were also affected by expectations of an imminent hike in the US interest rate, as “Apple” shares fell by 1.05%, and “Alphabet” and “Amazon” shares fell by 0.8% and 0.6%, respectively.

The Federal Reserve’s meeting last week showed that half of the FOMC members expect a rate hike next year, instead of the majority of expectations in June that they would not move rates until 2023.

In the oil market, the price of Brent crude futures for November delivery rose 1.8 percent, or $1.44, at $79.53 a barrel upon settlement, the highest level since October 2018.

As for gold, the price of the yellow metal futures contract for December delivery rose marginally by 0.02%, or 30 cents, to reach $1,752 an ounce upon settlement.

In economic data, US durable goods orders rose 1.8% in August on a monthly basis, after increasing by 0.5% in the previous July, compared to expectations that it would rise 0.7%.

The article “Dow Jones” rises alone at the close as Treasury yields soar was written in the Stock Exchange.