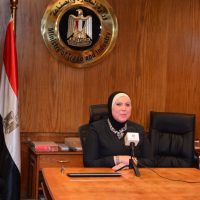 Al-Sayyad: 30% of the remaining amounts owed to the “Engineering Industries” exporters.

Elias: The “packing and packaging” companies have received their dues until June 2020

The Export Development Fund issued 338 certificates to 456 exporting companies, as part of the implementation of the third phase of the exporters’ prompt payment initiative.

Nevin Gamea, Minister of Trade and Industry, said that the total support that was disbursed amounted to 874.8 million pounds, net of 785.5 million pounds, after deducting all tax and gas debts, and the number of advanced companies reached 1634 companies.

In a statement, it added that the provision of these dues comes in implementation of the presidential directives with the support of the export sector, and the speedy response of the export burdens due to the exporting companies.

She explained that the return of the exporters’ dues to the fund will contribute significantly to increasing their production capabilities and enhancing the competitiveness of Egyptian products in foreign markets, especially in light of the Corona virus crisis.

The Ministry of Finance and Commerce and Industry launched the initiative for the immediate payment of the exporters’ dues, which allows for the payment of 85% of the total value of the dues immediately instead of paying them in installments, to enable the exporting companies to fulfill their obligations towards their customers and to preserve employment.

Sherif El-Sayyad, head of the Export Council for Engineering Industries, estimated the remaining export subsidy dues to sector companies at 30-40% of the total receivables.

He added to “Al Borsa” that the initiative contributed to providing financial liquidity to companies, especially during the peak period of the spread of the Corona virus and the slowdown in the movement of exports.

The initiative also gave companies a positive impression about the government’s commitment to pay the companies’ dues, regardless of the justifications, especially as it paid the dues during the period of the spread of the Corona virus.

Al-Sayyad said that the council aims to expand exports in African countries during the next stage, as it is one of the most important markets that attract Egyptian products, and in conjunction with the government’s goals to expand exports to the continent of Africa.

He added that the expansion of trade missions and foreign exhibitions is one of the most important axes for increasing exports, and the council participated in a trade mission to Zambia with the participation of 15 companies last week.

The new program grants exports to Africa, Russia, South American countries, CIS countries, China and some other countries 50% basic support, for a year as well, after which the Fund decides the approved support percentage.

Exporters to African countries receive an additional 50% support percentage on transportation during the first year of the program, to rise to 80% during the second year.

Nadim Elias, head of the Export Council for Printing and Packaging, said that the sector companies have paid their dues until June 2020, and the dues for the last fiscal year remain.

He stressed the necessity of disbursing the dues for the fiscal year 2020-2021 to avoid accumulating dues for the new fiscal year, especially as some companies reduce the value of the product to increase exports, considering that they obtain export dues as soon as possible.

The head of the Export Council for Printing and Packaging indicated that the immediate payment of the dues of the exporters helped it fulfill its obligations during the last stage.

The article spent 874.8 million pounds as part of the “immediate payment of exporters’ dues” initiative, which was written in Al Borsa newspaper.