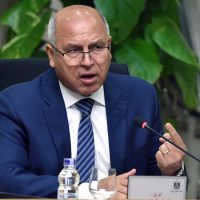 During the meeting, the minister stressed the intensification of coordination between the two sides during the coming period and holding joint meetings on the sidelines of the Arab transport ministers’ meetings next week to study the activation of protocols and memoranda of understanding signed during the past years between the two sides in the field of maritime and land transport and discuss participation and investments in transport projects in Yemen, in addition to Participation in setting up a joint working mechanism for developing Yemeni ports, training workers in the sector in Yemen at the Arab Academy for Science and Technology, and discussing the timetable for starting the implementation of joint cooperation frameworks.

The team, Engineer Kamel Al-Wazir, said that the national Egyptian companies are working in the field of infrastructure and sector development in a number of Arab countries such as Iraq, Libya and Sudan, and that they are ready to carry out all the required works from the right side.

Dr. Abdel Salam Saleh Hamid praised the relations between the two sides and the great role that Egypt plays in cooperating with all Arab countries, praising the great development that Egypt is witnessing in various fields, including the transportation sector.

He said that the Yemeni side is looking forward to joint cooperation in the field of maritime and land transport, especially in the field of developing Yemeni seaports and infrastructure, and in the field of training and technical qualification for workers in the transport sector in Yemen, given the great experience that Egypt enjoys in this field and the presence of a large number of specialized institutes in the sectors in Egypt.

The article Egypt cooperates with Yemen to develop sea and land transport was written in Al Borsa newspaper.