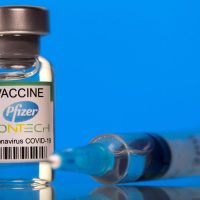 Chargé d’Affairs: We thank Egypt for its assistance to America at the beginning of the pandemic

Hala Zayed, Minister of Health, announced the receipt of 1.6 million doses of the new Corona virus vaccine, produced by “Pfizer”, today, Thursday, at Cairo International Airport, provided by the US government through the “Cofax” mechanism in cooperation with the International Alliance for Vaccines and Vaccines “GAVI” “.

Khaled Megahed, Assistant Minister of Health and Population for Awareness and Community Communication and the official spokesperson for the ministry, explained that the “Pfizer” vaccine has approval for emergency use from the World Health Organization and the Egyptian Medicines Authority, and it is two doses separated by 21 days.

He pointed out that the received vaccines shipment will be subject to analysis in the laboratories of the Egyptian Medicines Authority before being distributed to the 1,100 vaccination centers distributed across the governorates of the Republic.

Dr. Mohamed Hassani, Assistant Minister of Health and Population, thanked the Chargé d’Affairs of the US Ambassador to Egypt, for the United States’ support to Egypt with that shipment, pointing out that today’s shipment of “Pfizer” vaccines is the first in a series of shipments provided by the United States of America to Egypt, amounting to about 5 million doses.

Hassani added that today’s shipment of “Pfizer” vaccines arrived in Egypt in boxes designated for dry preservation, and will be subject to analyzes in the laboratories of the Egyptian Medicines Authority within a period not exceeding 14 days, before being distributed to vaccination centers.

The Chargé d’Affairs of the US Ambassador to Egypt, Nicole Champagne, stressed the importance of cooperation between governments and peoples’ solidarity during the response to the Corona virus pandemic, expressing her appreciation for Egypt’s sending medical supplies to the United States of America at the beginning of the pandemic, and the United States of America sent 250 respirators to Egypt, In August 2020, affirming the US government’s commitment to Egypt’s continued support for its leading role until the end of this global health crisis.

The article Egypt receives 1.6 million doses of the “Pfizer” vaccine against “Corona” was written in Al Borsa newspaper.