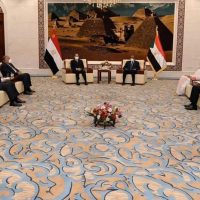 President Abdel Fattah El-Sisi said that Egypt and Sudan affirmed the imperative of returning to serious and effective negotiations with the aim of reaching, as soon as possible and before the next flood season, a fair, balanced and legally binding agreement regarding the filling and operation of the Renaissance Dam, in a manner that fulfills the interests of the three countries and strengthens the bonds of cooperation and integration between The Three Countries and Their Peoples.

President Al-Sisi added – during a press conference after his talks with the head of the Sudanese Sovereignty Council, Lieutenant General Abdel Fattah Al-Burhan, today, Saturday, in Khartoum – that his discussions with Lieutenant General Abdel Fattah Al-Burhan dealt with a number of issues of common interest on the regional and international arenas, within the framework of close connection For the Egyptian and Sudanese national security, and in an effort to unify the joint efforts between the two countries aimed at achieving stability on the Arab and African arenas.

He pointed out that the talks also dealt with developments in the negotiations of the Grand Ethiopian Renaissance Dam, a file that touches the core of the vital interests of Egypt and Sudan, as the two downstream countries in the Nile Basin that will be directly affected by this huge project, noting that they agreed on the importance of continuing close coordination and consultation in this regard.

President El-Sisi affirmed the identical visions between the two countries on rejecting any approach based on seeking to impose a fait accompli and to extend control over the Blue Nile through unilateral measures that do not take into account the interests and rights of the two downstream states, which was embodied in Ethiopia’s announcement of its intention to implement the second phase of filling the Renaissance Dam even if No agreement has been reached to regulate the filling and operation of this dam, a measure that may threaten serious damage to the interests of Egypt and Sudan.

President El-Sisi pointed out that the talks dealt with ways to re-launch the course of negotiations through the formation of an international quartet that includes the African Union, the United States and the European Union, as well as the United Nations, to mediate the negotiation process, which is the mechanism proposed by Sudan and supported by Egypt, which aims to support the efforts of President Felix Tshisekedi, President of the Republic. The Democratic Republic of the Congo, and maximizing the chances of the success of the negotiation track, affirming his full confidence in the ability of the Congolese president to manage these negotiations and achieve a breakthrough in them in order to reach the desired agreement.

President El-Sisi said, “I assure you that Egypt will remain with you heart and soul, supporting your efforts for the development, stability and prosperity of the brotherly Prime Time Zone of Sudan, which is an integral part of the security and stability of your brothers in the northern valley.”

He explained that the bilateral relations between Egypt and Sudan have witnessed a momentum worthy of praise over the past period, which is represented in the improvement of the level of coordination between the governments of the two countries through mutual visits and intensive and continuous consultations, which is an effort that aims in its entirety to intensify political coordination between the two countries and implement projects in a number of areas. The vitality, including the electrical connection, railways, trade, cultural and scientific exchange, and cooperation in the fields of health, agriculture, industry, mining and other fields, in order to achieve the desired goal of complementarity between the two countries, and to exploit the huge potentials of the two countries for the benefit of the two brotherly peoples.

He added: “Our meeting today came as a continuation of these efforts, and an endeavor to develop an integrated strategic framework and a common vision of the various aspects and areas of cooperation and ways to advance them, reflecting the convergence of our strong political will in this regard, and paving the way for a new phase of intense joint effort that meets the interest and aspirations of the two brotherly peoples.”

The President expressed his happiness to be in Khartoum .. and extended his thanks to Lieutenant General Abdel Fattah Al-Burhan and the brotherly Prime Time Zone of Sudan for the warm reception, generosity and hospitality accorded to Sudan and the traditions of its ancient Prime Time Zone, which have long been linked to Egypt by the ties of unity of destiny throughout the history of the two countries, and in accordance with their extended connection From the south of the Nile Valley to its far north, and with the intermingling of their two brotherly peoples, which was never interrupted.

President El-Sisi conveyed to the brotherly Sudan the leadership, government and Prime Time Zone, a message of brotherhood and support from the Egyptian Prime Time Zone, their government and their leadership, in all fields without exception, as an expression of Egypt’s sincere support for the great efforts made by the brothers in Sudan to manage the current transitional phase, and to face its challenges with courage, vision and determination to Moving forward towards a better future, an effort that everyone meets with much respect and appreciation … expressing his hope that the ongoing steps will contribute to creating the appropriate conditions to meet the aspirations of the brotherly Sudanese Prime Time Zone who made the most precious sacrifices for the freedom, prosperity and prosperity of their great homeland.

President El-Sisi also expressed his congratulations to the brothers in Sudan for the historic achievement of signing the Comprehensive Peace Agreement, which was achieved after great efforts that culminated in success as a result of the dedication of all Sudanese parties and their keenness to enter into the dear Sudanese homeland a new era of peace, development and prosperity that includes all the Prime Time Zone of Sudan.

President El-Sisi concluded his speech by saying, “I take this dear occasion to express once again my great happiness to be here today among the brothers in Sudan, and to renew my deep thanks for the hospitality I received.”

He expressed his full confidence that the next phase of joint action and cooperation between the two countries will continue in various fields, guided by the common vision, clear determination, solid political will and sincere efforts on the part of Cairo and Khartoum, and will move forward in the interest of the two peoples, but rather the one Prime Time Zone of the Nile Valley in their two countries, Egypt and Sudan.

The Sisi article: The emphasis on the inevitability of returning to serious negotiations to reach a fair agreement on the Renaissance Dam was written in Al-Borsa newspaper.

Messi publishes exciting videos of his wife in the gym after a video of her kissing under water! | A homeland tweeting...