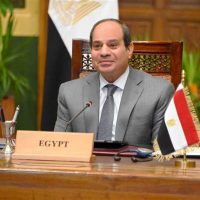 This came in a joint press conference between President El-Sisi and the Hungarian Prime Minister after their talks today in the Hungarian capital Budapest.

President El-Sisi said that he agreed with the Hungarian Prime Minister to move forward for cooperation in various fields and to give a great impetus to joint cooperation in the fields of agriculture, economy, tourism and industries, and to benefit from the technological expertise of our friends in Hungary.

The President expressed his deep appreciation to the Prime Minister of Hungary for his continued support to Egypt, which started early, and his confidence that Egypt will overcome difficult circumstances since 2011.

He expressed his thanks to Hungarian Prime Minister Viktor Orban for inviting Egypt to attend a summit of Visegrad countries for the second time, describing at the same time the bilateral talks between Egypt and Hungary as “positive and fruitful.”

President Sisi said that the bilateral talks between the two sides are always good and fruitful in all fields.

President Sisi stressed his respect and appreciation for the Hungarian Prime Minister for his continuous support for Egypt and its army, and his confidence that Egypt will overcome the difficult circumstances that Egypt experienced in the years “2011, 2012 and 2013,” stressing the improvement of the current situation in the country in all different fields.

He added, “It was agreed between Egypt and Hungary, during the bilateral talks, to move forward in various fields, including agriculture and tourism, as well as in all other different industries, in order to benefit from the expertise and capabilities that currently exist in Hungary.”

President Sisi expressed his appreciation for cooperation with Hungary in all fields, saying, “We talked yesterday about the issues of illegal immigration and the ‘measures that Egypt is taking to prevent the exit of any boat or any illegal immigration across its borders.

President Sisi stressed the necessity of restoring stability to the countries exporting migrants, whose sea ports or beaches are used to cross to Europe in one way or another to prevent illegal immigration, noting that “this dimension is not only for Europe’s security, but also includes a human and moral dimension.” We should not allow Prime Time Zone to throw themselves into the sea one way or another.”

The president added that the Hungarian Prime Minister will be happy to see the achievements he talked about when he visits Egypt to attend the inauguration of the new administrative capital, which will be a declaration of the new republic in Egypt after a difficult period that the country passed through during the past years.

President Sisi reiterated his thanks to the Hungarian Prime Minister for the invitation and the warm reception and hospitality, as well as his understanding of the region’s issues, the method of dealing with them, and the momentum achieved today by agreeing to advance cooperation between the two countries in various fields, whether they are economic, industrial or even security fields.

In conclusion, President El-Sisi expressed his happiness to meet the Hungarian Prime Minister and to discuss all issues with him, praising his wise leadership of the country, wishing him all success.

Al-Sisi’s article: Preventing illegal immigration to Europe depends on the return of stability to the countries exporting immigrants was written in Al Borsa newspaper.